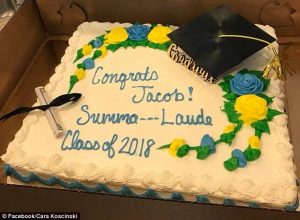 The question I ask Publix market, or any other cake supplier, is why shouldn’t someone be able to have an obscene cake? Who does it hurt to have obscene, racist, anti-Semitic, politically incorrect, insulting, culturally insensitive, or otherwise inflammatory words on a cake?

Sure, if the Ku Klux Klan were to send a birthday cake to President Obama with vile and racist words written on it, that would be disgusting and all, but it would reflect badly on them, not the former president. If someone sends a cake with something horrible written on it to a rival, that is a testament to their own lack of decency.

Certainly, someone who received such a cake has every right to expose the sender to public ridicule. The sender might face consequences for making threatening statements. There are legal avenues available for pursuit in such situations.

There are no laws against using obscene words when communicating with one another, unless the FCC decides to get involved. Don’t get me started on that outdated and irrelevant agency. I can write obscene words in this blog. I choose not to do so because I find delight in using my Brobdingnagian vocabulary to insult, demean, and otherwise humiliate without vulgarity those who annoy me.

Freedom is not always pretty and is most certainly vulgar at times. I’ve been called all sorts of names. I’ve had my intelligence questioned in crude ways more than once. People are not always nice to me, often in response to my various articles. I can take it.

This Libertarian implores the bakeries of the world: Let them have their obscene cake and eat it too.