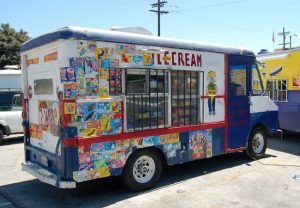 Back in 1973 an ice cream truck hit and killed a child in the city of Elgin in Illinois. Dismayed by this horrible accident the politicians decided to ban ice cream trucks altogether in the hopes of preventing another such incident. Now in 2018 the ban has been lifted to much joy.

I’d like to examine this situation from a Libertarian perspective. It’s fairly difficult to find common ground amongst Libertarians but the general idea is less government and more freedom.

There is no doubt ice cream trucks attract children to them. They also move fairly slowly and block roads. There are risks of accidents because of the trucks. Going by the ice cream truck industry in St. Louis there is also a large amount of bribery of city officials and strong-arming of competition to get and keep licenses in the lucrative business.

What if the Elgin ban was taken up by the city of Chicago, the state of Illinois, or even the federal government of the United States. The ban was instated to protect children after all. Do we not see many other laws with the exact same logic applied to them?

This series of events would ensure people have slightly less access to ice cream. In this modern age you can order ice cream bars from Amazon and have it delivered to your door. You can purchase it at every local market. The inconvenience is relatively small. We the people would still have access to ice cream. This is the argument of statists for the most part. We are taking away a tiny sliver of your freedom for an incremental increase in safety. If there are no ice cream trucks, no children will be struck and killed by them.

It’s true no children were struck by ice cream trucks in the ensuing years but there is no way to know if any would have been without the ban. The real impact was the people in Elgin were not able to purchase ice cream from such trucks. People in surrounding communities were able to do so. The ban had other consequences as well. It not only prevented people from purchasing ice cream but also gave ice cream vendors in fixed locations a competitive advantage. It prevented companies from providing a service to a willing population. It resulted in an economic environment that would otherwise not have existed.

That being said, it’s certainly within the scope of Elgin’s politicians to instate the ban. It is equally within the power of voters to cast their ballot for those who want to remove the ban. This is all a good thing. This is an example of a Representative Republic in action.

The question you must ask yourself is if you believe the tiny amount of freedom given up is worth the safety guaranteed by that action.