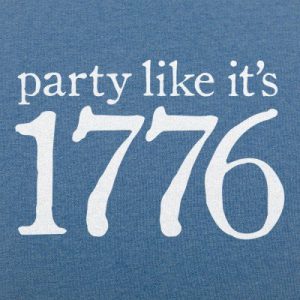 The latest affront to life, liberty, and the pursuit of happiness took place at Cherry Hills High School in New Jersey when the prom committee decided to have a Party Like It’s 1776 theme. People were offended because the Declaration of Independence did not free slaves. The reasoning being that slaves were unable to party in 1776 and therefore black people, presumably descended from those slaves, were being forced to participate in a culturally offensive prom.

This ignores important factors. The first being that the Declaration of Independence is about the people who lived in the Colonies declaring they would no longer live by rules of the British Empire. If anyone should be offended by a Party Like It’s 1776 Prom it should be people who lived under the banner of said Empire. English, Irish, Scots, Canadians, Australians, Rhodesians, Indians, South Africans; the list goes on and on.

Another factor is that many black people in the Colonies were free and living in the northern states. Recent estimates suggest that the Patriot military was made up of four percent blacks. Crispus Attucks is believed to be the first person killed at the Boston Massacre that was one of the inciting incidents of the declaration. Many of these heroes gave their lives for Independence. Their descendants deserve to celebrate 1776 far more than me, whose Jewish ancestors fled antisemitism to America around the turn of the century.

Now, I’m not suggesting people can’t be offended by whatever they choose; I’m just telling you not to expect me to feel equal outrage or to bow to your unreasonable demands. If the offense is great enough and people join your cause, I will suffer the consequences. However, if we are talking about a bunch of young men and women who just want to party and don’t really care about your cause, then let them go about their business without interjecting your agenda into their fun.

I’m pained I feel the need to state my disgust at the enslavement of blacks in the Colonies and eventually the United States. It is a stain upon our nation. Those who defended it then or justify it today are vile. This should go without saying, sadly it does not.

In any case, the point I’m trying to make is that the prom committee of Cherry Hills is free to choose the theme of their desires. If it was Egyptian or Roman I would not be offended, there might be Jews and Christians who feel differently and they can choose to boycott said prom. That’s their business.

As for the rest of the fine young folks at Cherry Hills, go ahead and Party Like It’s 1776 and don’t worry about the attitudes a bunch of old people are trying to force upon you. If you look hard enough, life is filled with things that give offense. My advice, stop looking and start partying.