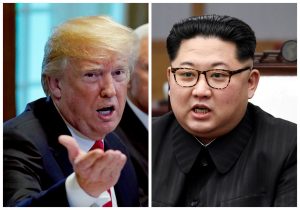 The recent meeting between President Trump of the United States and Supreme Leader Kim Jong-un of North Korea is an interesting turn in the tumultuous relationship between the two countries and I thought it might be worthwhile to examine that history. It all began way back in 1953 when the Korean War ended with the separation of North and South Korea.

The area between the two nations made up of the former Korea is considered a demilitarized zone and while there are no armaments in the zone, directly behind the lines is an area considered the most militarized place on Earth. There were a number of incidents between North and South Korea but basically the peace was held and the United States under Presidents Truman, Eisenhower, Kennedy, and Johnson were happy with the status quo.

It was at this time North Korea began to realize their nuclear ambitions. With Soviet help, they built two nuclear reactors although could not yet produce material capable of making a nuclear bomb. It is this progress that might have spurned the actions that occurred next.

Plans for reunification of Korea took place in the early 1970s and one guesses President Nixon at least supported this strategy as there was no major U.S. intervention to prevent it. These talks eventually failed but it is the first time we see at least tacit approval for a softer approach to the relations between North Korea and the United States. It’s reasonable to conclude that the possibility of a nuclear powered North Korea spurred the talks seeking normalization.

During this time North Korea’s economy was on equal footing to that of South Korea but things soon fell apart as the disintegration of the Soviet Union led to the end of all economic support. This economic collapse resulted in immeasurable hardship on the people of the North Korea. It also spurred the North Korean government to move ahead with their nuclear ambitions.

Presidents Ford, Carter, Reagan, and George H.W. Bush basically sat idly as these events went on, apparently uninterested in establishing a lasting peace that might curtail these inclinations and equally uneager to engage in military conflict.

The North Koreans were making great progress toward developing nuclear weapons by the time President Clinton came into power. He hoped to engage with the North Koreans as a way of slowing the progress toward nuclearization and also relieving the tremendous suffering in that nation. We helped build a nuclear power plant that was far less able to produce materials needed to make nuclear bombs in exchange for the dismantling of reactors which could easily produce such material. The idea was largely to normalize relations as was last attempted when Nixon was president.

George W. Bush reversed this policy and insisted that North Korea be treated as a rogue nation. This along with the destruction of Iraq by forces led by the United States further pushed North Korea toward building nuclear weapons as quickly as possible, it also exacerbated the already terrible economic situation in that nation. At this time the nuclear power plant we helped build was raided and fissionable material of low grade was taken from it. This was fashioned into nuclear bombs of unreliable quality and an eventual nuclear detonation.

The North Koreans began to focus on rockets capable of delivering their small nuclear arsenal to distant targets and their launch of a satellite in 2009 scuttled President Obama’s attempt to reengage with North Korea as was done under Nixon and Clinton. Obama’s strategy seemed to be to engage in small treatise with North Korea but not attempt a large-scale attempt at negotiations as was promoted by Clinton and at least approved of by Nixon.

That takes us to the recent events. President Trump seems to want to engage in negotiations with North Korea. He sees that as a better way to achieve nuclear disarmament than aggressive policies of sanctions and threats of military action, despite his rhetoric to the contrary. This puts him more in line with the Nixon and Clinton presidencies.

Trump agreed to and held a one-on-one meeting with Jong-un which both the George W. Bush and Obama administrations thought would give North Korea an inadvisable standing as an equal. They always insisted upon multi-national meetings.

The United States has largely vacillated between three policies; a hard line, an indifferent line, and soft line. President Trump seems to be more eager for the latter.

The success or failure of Trump’s diplomatic policies is subject of much speculation, which I choose not to engage upon. We will see.