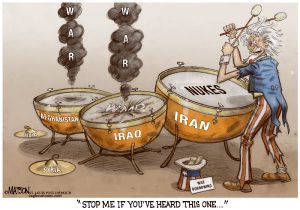 I see a familiar pattern in the beating of the war drums. Our enemies are readying to attack us. They are engaged in acts of war upon the United States. We must defend ourselves. It is quite similar to the mantra that came out of President George W. Bush’s Whitehouse prior to our invasion of Iraq. It seems to be resonating with the same group of people.

War is not a glorious endeavor. War means death, maiming, horrific psychological damage. Even if we are successful in various combat scenarios it entails long operations where soldiers are subject to guerilla style attack. It means families are split for years, that fathers and mothers are separated from children. And this is only for our troops, the ostensible enemy is mainly non-combatants and they will suffer the most, they always do in war.

War is sometimes necessary, this I do not deny. However, I see nothing to be gained from war in Syria or war in North Korea. I’m quite certain our military can inflict huge amounts of damage. We can kill hundreds of thousands of people. The losses of our enemies will likely be far greater than any we sustain, but to what end?

North Korea is a nation of twenty million people. It is physically adjacent to China and far from our shores. Supporting such an effort would cost trillions of dollars in addition to the money we are spending in Iraq and Afghanistan, two conflicts from which are yet fully extricated.
Syria is in the middle of an incredibly volatile region. There are so many different factions involved it’s impossible to count them all. Any ally of ours today will almost certainly be an enemy tomorrow. Our troops in Afghanistan are being attacked by supposed allies on a weekly basis and the situation in Syria will be far worse.

Russia has a strong military, certainly not as powerful as our own, but one that can inflict serious damage to our soldiers. They can sink our ships and shoot our planes out of the sky. China can do the same.

Supporting our troops in these far-flung regions is not an easy endeavor and our allies are more and more closing their doors to our support lines. Our major airfield in the region is at Incirlik but the Turks are not in agreement with our policy regarding the Kurds. We have armed the Kurds and aided their attacks. It is likely Turkey will refuse to allow us to use this base in active war. We maintain bases in Iraq, despite any nonsense you’ve heard that we fully pulled out of the country, but they are not as functional as Incirlik.

I suppose people somehow get the illusion in their head that war will be easy. That we won’t take too many casualties, that not that many soldiers will be maimed. I’m not sure how, after recent events, people can think like this, but as I read the comments it is undeniably so.
And the drums beat on, those who support them are vocal. The more people support such saber rattling, such belligerent talk, such tough posturing; the deeper we become enslaved to these policies. We can’t back down once we’ve crossed certain lines. At least that’s largely the sentiment I perceive.

Sometimes I think it is people just carrying over their feelings from the recent election, half-troll, half-serious. I see this apparent eagerness to attack our enemies, to put our troops in harm’s way, to expose so many people to so much potential harm and people treating it like a game of words to one-up their friends on Facebook.

This is war. This is lives. This is not a game. Choose your position wisely.