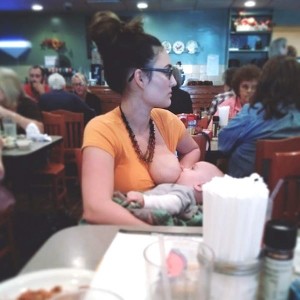 There’s apparently a big story making the rounds about a woman named Ashley Kaidel who posted a picture of herself breastfeeding in a restaurant.

Apparently a nearby woman was glaring at Kaidel for her display. Kaidel took exception and glared back which is when the picture was taken. Kaidel writes in her Facebook post: If a mother is more comfortable covering herself because SHE feels better doing so, then I totally support that.

She has accumulated almost 400,000 likes to the post as the image has gone viral.

She’s angry because the other woman in the restaurant is making an attempt to shame me and indirectly tell me without words that I am wrong and need to cover myself.

I’m a man. I’m not married. I’ve never had a child. Yell at me all you want, but Kaidel is in the wrong here. I’d be uncomfortable if a man pulled off his shirt and exposed himself this way, let alone a woman.

I’m upset when people a few tables over start yelling at each other. I think it’s rude when a man wears inappropriate clothes to a fine dining establishment. Why? Because it’s disrespectful to everyone else in that restaurant. It’s a ME-ME-ME attitude on display for the world to see.

Like it or not a female breast has a sexual aspect to it. It’s fine at a nudist beach, in the changing room, at home, or any other place where it won’t be intruding on the lives of others. Not to mention that it’s not that difficult to cover up. Yes, it’s a uniquely female problem but does that mean someone is sexist to suggest that perhaps you shouldn’t pull out your breast in public? Is it sexist to say a man shouldn’t expose his penis in public? Is it sexist to say a woman shouldn’t show her vagina in public? I think not.

Kaidel’s long rant makes it clear she has an agenda. Everyone should breastfeed everywhere so little girls learn to love it. You have to read the whole self-centered thing yourself to truly get her narcissism. She’s a crusader, make no doubt about that. Most laughable is her claim at the end that she didn’t make the Facebook post to get attention.

All that aside, it’s not a matter of disgust, intolerance, hatred, or shaming. It’s a matter of respecting the other diners at that restaurant. Kaidel is the guilty party in that regard.

5 thoughts on “Nasty Glares for Breastfeeding in Restaurant”