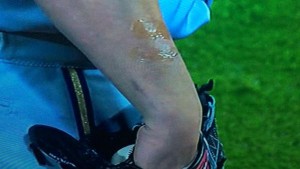 Most of you probably haven’t heard that a Milwaukee Brewer reliever named Will Smith was recently suspended for eight games because he had a foreign substance on his arm while pitching.

There are a lot of things wrong with what happened and the least villainous, in my opinion, is Smith. I’m a St. Louis Cardinals fan and I have no love for the Brew Crew but the blatant hypocrisy that is baseball in regards to pitchers and foreign substances is so egregious that it rouses my ire nonetheless.

The undeniable fact of the matter is that new baseballs, even when “rubbed up”, can be difficult for a pitcher to grip and the situation is made worse in cold weather. To counter this pitchers use various mixtures that allows them to grip the ball a little better and thus control it out of their hand. If the ball slips out of their hand a little too early or stays in just a little too long the pitch can go anywhere. This extra control allows them to keep the ball over the plate instead of in a  hitter’s ear. Everyone wants the pitchers to have this extra control and every player, umpire, manager, and coach is well aware of the practice.

The rule against foreign substance was largely designed to keep pitchers from putting something on the ball or scuffing the ball in such a way as to make its motion unpredictable and more dramatic. That’s not what is happening here. Everyone knows what is happening. I remember back in the 2006 World Series when pitcher Kenny Rogers left an obvious blob of goo on his hand. The Cardinals reaction? Manager Tony LaRussa quietly told the umpire to ask him to wipe it off between innings. No big deal, no accusations, no suspensions. On with the game.

The bottom line is quite simple and any number of baseball analysts have suggested it. MLB needs to find an acceptable substance and delivery system and allow the pitchers to use it legally. Problem solved, hypocrisy resolved, game on.

What bothers me most about all of this is the sanctimonious eight game suspension. It’s simply for show and it’s completely unfair to Smith and the Brewers. The people who suspended Smith know it’s common practice and not designed to alter the flight of the ball. The umpires know it. The Atlanta Braves, who reported Smith and asked the umpires to act on it, know it, the commissioner knows it, everyone knows it. It’s arbitrary enforcement of a ridiculous rule by a governing body that is exerting its power because they can; rather than using such power to create a better game when such is easily within their reach.

It’s abuse of power and that’s something that pushes my Libertarian buttons.