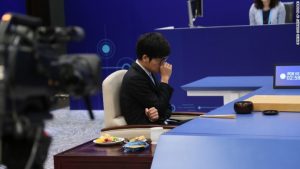 The march of Artificial Intelligence continues on as was demonstrated when a computer defeated champion Ke Jei in two matches of the game Go. Go has a staggeringly large amount of moves and it was long thought it would take decades for computers to become as dominant in Go as they have become in chess. It didn’t take that long and this is good news, despite what you may be reading about the dangers of AI.

The reason it is fantastic can be inferred by what has happened to chess since computers became unassailable at the game. There was fear about the rise of computers and the game of chess. It was generally assumed once computers could defeat people, chess would largely be solved. That all anyone would have to do is memorize the few correct plays and that would be that. The game would die.

The reality turned out to be exactly the opposite. Before computers there were a limited number playable chess lines at the highest levels. By lines I’m talking about opening sequences and general ideas. For less skilled players it was more than possible to use many different lines but at the top level the game had become somewhat stagnant. Chess great Bobby Fisher lamented this and predicted the end of the game.

Computers do not get discouraged because a particular line doesn’t seem to be working. They continue to calculate the possibilities. These chess computers discovered many of the lines considered inferior were actually quite playable. They came up with innovate new ideas that expanded the repertoire available to top players. The Super Grandmasters took note of these moves and began to expand upon them. Then computers in turn extended each of these new ideas.

Chess is experiencing a golden age thanks to computer intervention. There are many new lines and competition at the highest levels is filled with exciting games rather than boring draws played down familiar openings.

I would expect exactly the same thing to happen with Go. But that is only the beginning. As AI is tasked with solving all sorts of problems it will only expand the possibilities. It will think through lines that a human would discard out of hand. It will find innovative solutions to problems we thought impossible. This will take place in industry after industry. Computers with AI will expand our knowledge, increase the possibilities, and deeply enrich all our lives.

I know there are those out there with fears and I respect their opinion but politely disagree. Humanity is quickly approaching a new age. Artificial Intelligences will lead the way with breakthroughs in medicine, energy, transportation, crop management, and virtually every other endeavor.

Within fifty years our lives will be changed dramatically and, in my opinion, almost universally for the good of all. I only hope I live long enough to reap the benefits.