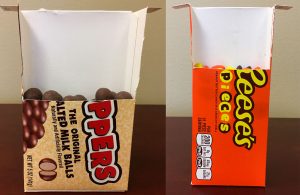 An interesting lawsuit has been filed in my home state of Missouri in which a man claims Hershey is violating the law by underfilling their candy boxes. The reason the case fascinates me is because it brings into question both the manufacturer and the consumer.

The man filing the lawsuit believes the box size is a promise of a certain amount of candy. In a contract situation, this means Hershey has promised to deliver that quantity of candy for the price of the box. If the purchaser is deceived about this amount, then the transaction has not been successfully completed. The person making the purchase is entitled to either the correct amount of candy or a refund on a percentage of their outlay.

On the other hand, Hershey believes the weight of the box is sufficient to inform the customer of the nature of the quantity of candy within. If a customer picks up the box, judges its weight, and gives it a rattle, they are fully aware of how full the box is and Hershey has fulfilled their promise.

I think both sides have a legitimate point. Unlike certain boxed items, candy does not need extra space in order to survive jostling. Things like potato chips need the room in order not to shatter on shipping. Candy does not suffer from this issue and therefore there is only one good reason not to fill the boxes to the top. Hershey is hoping people will be deceived by the size of the box and discount the weight and the rattling factor.

The purpose of the larger boxes is simply to deceive, nothing more and nothing less.

But does this intent to deceive rise to the level of breaking a promise? Certainly, Hershey representatives are correct when they say the consumer is fully aware of the weight of the box and the lack of fullness. You cannot pick up such a container without noticing it is far short of being completely full. If the purchaser was deceived, then aren’t they to blame?

I strongly suspect Hershey will prevail in this lawsuit but I would like to think they could easily fill their boxes and forego the attempt to deceive. I understand they don’t fill the boxes because this strategy has an apparent impact on their bottom line. A box of Whoppers filled only slightly more than halfway means there is the appearance of saving a huge amount of money.

Hershey produces X number of boxes for sale. There is Y amount of product in those boxes. If you decrease Y, this lowers the cost of material to make the candy, the cost of shipping as weight is reduced, and perhaps increases boxes sold because people go through the candy faster and come back for another box.

There is however, another factor. Hershey’s has competition in this world. If people continually get less candy for their money, they can easily go to a competitor for their sweet desires. This underfill strategy might be costing the company a lot of money in the long run. Particularly if their competitors are not engaged in such.

That is the glory of capitalism. Consumers have a tremendous amount of power. Rather than filing lawsuits we can get what we want simply by changing our purchasing habits. Naturally a single person can’t do very much, but if enough people start to abandon Whoppers, you can bet Hershey will start to fill the boxes with more product.

This is even more true in the age of Social Media and the internet. Simply pointing out the discrepancy in the size of the box compared to the amount of candy therein can garner a huge amount of attention. If enough people agree with your assessment and Whoppers’s sales drop significantly in a short period of time, executives at Hershey will notice. They know exactly how many boxes are sold and any decline is something they will immediately attempt to rectify.

A Social Media strategy is likely more powerful than any lawsuit.

The Information Age has put increasing amounts of power in the hands of consumers. Speaking as a Libertarian I say … excellent.