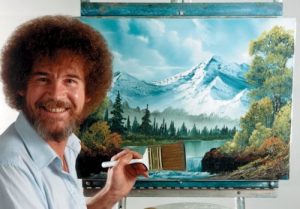 I was not surprised to find that painter Bob Ross, eighteen years after his death, is finding a new audience on streaming services like YouTube and Twitch. Mr. Ross, for those of you who don’t know about a PBS television series called The Joy of Painting, was a painter who used a wet-on-wet technique to quickly create beautiful landscapes. His calm and happy demeaner mixed with his skill made his show amazingly popular for the time. I can only imagine how many viewers he’d have to today if Lymphoma hadn’t struck him down at age 52 in 1995. If he was painting live on his channel I’d guess he’d be among the top-rated content providers.

In addition to hosting a popular television show he also inspired countless artists throughout the United States and now that message is being spread worldwide. What I’d like to talk about today is the value of what Mr. Ross provided and what it tells us about humanity as a whole.

What is it about Mr. Ross that is so appealing? His genuine good nature? His skill as a painter? His happy little trees? I’m of the opinion it was a combination of his talent, serenity, and ability to communicate a complex procedure in a way almost everyone finds understandable. Mr. Ross made you feel good about yourself and about life as a whole and that’s a message of astounding popularity.

On the other hand, the internet is filled with people spewing messages of rage and hate against anyone and everyone who disagrees with them about anything. Those people get an audience as well but not as big as Mr. Ross’s. Ask yourself, is watching someone like that helping you? Does it make you happier, better, nicer? Does watching Mr. Ross achieve those ends?

It’s an important question in deciding how you go about leading your life. Do you think you’re helping yourself by calling other people stupid or making fun of their politics? Sitting around patting yourself on the back about how smart you are and how stupid and wrong everyone else is? I think you are not. I think you are harming yourself.

My advice is to head on over to the streaming service of your choice and watch Mr. Ross paint a picture. Especially if you’ve been listening to one of the angry, talking-heads on your favorite news channel or social media network.

Happy is better than angry and Mr. Ross proves it. His popularity demonstrates what people truly want in their lives, even if they don’t know it.