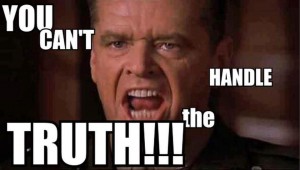 This weekend my step-mother missed a step resulting in a badly and gruesomely broken leg. As she lay there writhing in agony she said, “I think I my have broken my leg”.

I responded, “No, you broke your leg.”

Not exactly Mr. Compassion and Kindness. The incident is a window into me to some degree but it brought to my mind a question. Is it better to be brutally honest or skirt around honesty with compassion? I recall another incident while visiting the great state of Alaska where my young niece, perhaps ten or eleven at the time, and me were staying in a cabin and she asked me what would happen if a bear came in the windows. The Denali guides had given us a lesson on what to do if a bear attacks earlier in the day. I responded, “It would kill us.”

Tess was not particularly happy with my response, as might be expected.

Are we better off hearing the awful truth at all times or is it better to soften the blow occasionally?

In the case of my step-mother it was quite clear her leg was broken, she knew it as well as did I. One couldn’t come to any other conclusion. It was going to require an ambulance, a stay in the hospital, and likely surgery. There was nothing to do about it so perhaps I could have said something a little softer, perhaps, “It does look that way but you never know”. Would that have been a better answer at the time? I think it’s the answer a lot of people who actually have a heart might give, but my black and little used blood pumping organ doesn’t seem capable of such.

Likewise with my niece I could have easily said something like, “I’ll protect you.” It would have been true to some degree as I would have tried to protect her but the reality makes almost no difference as a bear was not going to break into the cabin in any case. Giving a softer answer would have reassured her and probably allowed her a more restful evening.

I’m not really asking if my answers were wrong or right in both cases but examining a more philosophic question. When the truth is unhelpful and won’t change anything is it better to lie a little bit?

I seem to find it almost impossible to lie in situations like that. I’m sure it has to do with my social awkwardness and likely autistic spectrum nature but it makes me wonder if I might have more friends if I was a little less direct, a bit less literal.