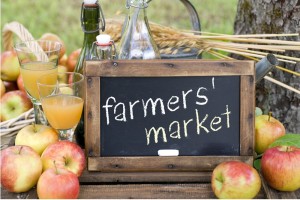 I recently got into a somewhat cantankerous although not particularly angry or heated debate at my Libertarian website about why I was a Libertarian rather than an Anarchist. One of those who disagreed with me brought up the example of a Farmers’ Market as a working anarchy.

I thought it was an excellent example of exactly what happens in a anarchic system. I’m fairly certain I will get more disagreement from my anarchy promoting friends. Let me explain my position and you can tell me what you think.

I live in the suburbs of a fairly large metropolis, St. Louis, and I’ve seen any number of Farmers’ Markets spring up around me. There was originally one in my home community of University City and also a fairly large one in a downtown neighborhood called Soulard. Since then I’ve seen others pop up in other suburbs nearby. Each time I’ve witnessed the exact same transition from small farmers cooperative into undercover, secret major produce outlet market.

What happens is a group of local farmers get together to start a market in a metropolitan area to get their produce directly to their consumers. It immediately becomes popular with the locals of that community. Major suppliers take note and begin to buy up the booth space with disguise names; because of their deeper pockets they are able to outbid the local farmers. Soon all the local farmers are driven from the market leaving only the major produce players.

Let’s contrast this with the places I’ve seen small farmers have the most success. At my local chain grocery store! The small farmer sells to the major chain that puts the local, seasonal, produce in a bin up front and resells it for a profit, but still at a lower rate than their non-local produce. Everyone wins. The small farmer has an excellent and reliable outlet for their seasonal produce, the chain makes a nice profit, and the customers get produce at a reasonable price without having to drive a long distance.

This is exactly why I’m not an Anarchist. Anarchy cannot sustain itself, at least at this time. What happens to virtually all anarchistic situations is they attract people who take over the system to their own benefit. In a Farmers’ Market this inevitably is the major produce suppliers. In a political “market” this is the despot.

What works is a combination of limited government working with small but largely free people. Libertarianism!

To me the choice is not between government and no government but between reasonable government and dictatorial insanity. There is no stable anarchy and the Farmers’ Market seems to be evidence to that point, not against it.