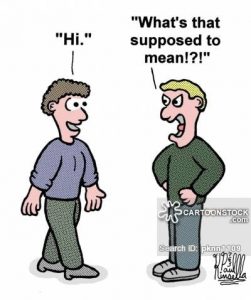 A number of angry, intolerant, unreasoning, and disgusting attacks have taken place recently and everywhere I see politicians and others talking about how “This isn’t who we are.” The reality is that this is exactly who we are. We might not like looking in the mirror. We can certainly pretend we don’t want this, don’t fuel it by passing along intolerant rhetoric without regard for truth, but the reality is this nation has become increasingly angry and intolerant.

Not a day goes by without a friend of mine on social media, people who undoubtedly consider themselves to be decent, moral, and kind; saying something nasty about a person who disagrees with them on some social or political issue. Moron! Idiot! Sheep! Trying to destroy our country!

Not a day goes by when a media personality doesn’t angrily denounce and make outrageous claims about the fate of the nation if a particular person is allowed to get away with their agenda.

Not a day goes by without an angry politician vilifying someone from the opposite party for their vision of the United States.

We are angry and intolerant. That is what the people of our nation are today. Perhaps it was different in the past and maybe it will change in the future but not today. This is exactly who we are as a people. If you agree with my politics then I will support every vile thing you say, I will excuse every disgusting action you take, I will pass along any lie that supports you. If I disagree with your politics there is nothing about you worthwhile. You are out to destroy this nation and there is no lie, no misinformation, no twisting of the facts that I won’t pass along in an attempt to hurt you.

This is exactly who we are. This fact is displayed loudly by the politicians we elect, by the news shows we watch, and by our own vitriolic and unreasoning mindset available on display at the social media platform of your choice. I see it every day, over and over again. You cannot convince me with your meaningless words, spoken only after horrific tragedy, that you, that we, are not in some way enabling the violence.

The more the anger rises, the greater the chance for violence. We are angry, we are intolerant, and some people are twisting this irrationality into violent and deadly assaults.

Don’t tell me what we are not. Show me.