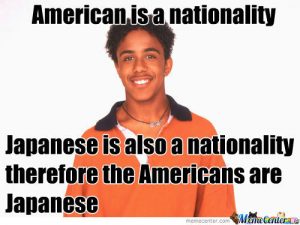 Good old memes. The idea verbalized by Richard Dawkins twisted into a phenomenon seen everywhere in Social Media. Generally, memes are simplistic and shallow but they are also often filled with bad logic and that’s where I get annoyed.

If you post a meme with bad logic, that tells me you have a flawed brain. This conclusion might not be completely fair. Perhaps you saw the meme and didn’t bother to think about it too much. You just saw it corresponded with your political point of view and shared it without thinking too much.

However, it’s my opinion not bothering to think about something is perhaps even worse than being stupid. A person who thinks the meme they are posting makes sense when it clearly does not, is stupid. The person who is capable of understanding the logic is bad but posts it anyway, is showing a deeper form of ignorance. Willful ignorance.

Basically, a person has intentionally turned off her or his brain so that person can say something she or he knows is untrue or illogical, simply because it is politically expedient. I think we see all too much of that these days. People are completely willing to say illogical and stupid things about opponents while defending allies with equally bad logic.

It’s rampant and it doesn’t help solve the problems we have in this country and in the world. Not only is it rampant but it’s virulent. People call each other horrible names and say vile things about one another in response to the illogical memes. The sort of words that if used face to face would result in violence. Because they are being said from a distance there is a security otherwise not available. The rage engendered from such words is real, even if it cannot be consummated with fisticuffs.

It is clear to me the way to solve large problems is to work together. Working as a team involves communication and working through disagreement in a productive and positive manner. That is the best way to come up with lasting resolutions.

That’s the serious problem with all these nonsensical and illogical memes. We think they don’t do any harm, but they encourage people to turn off their minds and blindly state things that don’t make any sense. Not that people aren’t responsible for their own actions. If someone posts such an idiotic meme, then it probably means they are an idiot. That’s reality.

And, in case you’re wondering, the meme that set off my rant was about the removal of monuments in southern states that were dedicated to confederates. It read something along the lines of: If you remove Confederate Monuments then the Civil War never happened and that means slavery never happened.

There are examples of bad logic in that meme. Can you spot them?