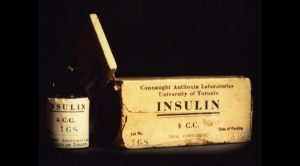 What do Insulin and the Internet have in common? The person most responsible for each patented the technology and gave it away for free. There is a lesson to be learned for ardent Libertarians and capitalists.

Back in 1922 a fellow named Frederick Banting, later Sir Frederick, managed to extract and purify something called insulin. Eventually, along with partners J. J. R. Macleod, Charles Best, Clark Noble, and biochemist James Collip, he created a version of the drug that did not cause side effects. Soon children in diabetic wards across the world were being injected and waking up. Prior to that discovery, the parents of those children simply waited for them to die. Diabetic shock was essentially a death sentence.

Sir Frederick and his partners then sold the patent for a whopping sum of $3. The reason they did this was to ensure insulin would be available to all at a reasonable price. They put their humanity ahead of their desire to earn money. The drug patent was worth millions, if not billions, of dollars.

You will note even today there is no generic version of insulin because the patent is essentially available to all. Anyone can come up with a method to produce insulin and sell it. They have to pay no one for the right to do so.

Not that long ago a fellow by the name of Tim Berners-Lee, later Sir Tim, was working at the European Organization for Nuclear Research (CERN) as an independent contractor. He came up with an idea called Hypertext which would allow researchers to share and update information. Over the years, he and others expanded on this idea. The result is the World Wide Web.

Eventually, Sir Tim organized the World Wide Web Consortium (W3C) located at the Massachusetts Institute of Technology which oversees all the protocols of the WWW. He made all of his ideas freely available with no patent or royalties due. He did this because he saw how much good the technology could do and wanted to make sure it spread across the world for the benefit of all.

Speaking from a misunderstood interpretation of Libertarian philosophy, it would seem the decisions of these two titans was rather stupid. Both of them could have gained considerable wealth from their discoveries. By giving them away they forsook riches, or so it would seem.
In actual practice, the situation is different. Because of their generosity and humanity, both received many rewards after essentially giving away multi-million dollar ideas. These rewards included a place in history and also financial success. Both men went on to rewarding careers and lives in which they were not only financially successful but renowned throughout the world.

Too often those who espouse a Libertarian philosophy or a Randian mantra, after Ayn Rand, focus on the financial rewards that success brings. This is a mistake. It is important to understand that financial success is only a byproduct of doing great things. There is also the reward of personal satisfaction. There is also the reward of public acclaim. Both of these things are not to be discounted in regards to self-interest.

If you were to do something that changed the world for the better, the personal satisfaction engendered would be of tremendous value to you as you aged. The continuous support you received from those you helped would be an all but endless source of joy and happiness.
Too often in this world we focus on money. It is merely the byproduct of doing good things for those around us. Certainly, there is nothing wrong with financial success and both Sir Tim and Sir Frederick achieved it despite their apparently altruistic goals. Still, I think it’s clear they made the right decisions.