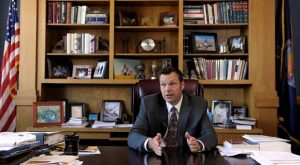 Ah, what danger we weave when first we practice to use Circular Reasoning. President Trump believes he won the popular vote but the tally indicates otherwise. This means there must be something wrong with the count. This means we now have something called the Election Integrity Commission which will suck up millions of dollars, vast resources, and most certainly violates the spirit of the Constitution of the United States if not the letter.

I, Tom Liberman, am always right.

How do you know, Tom?

Because I said so and I’m always right.

As ridiculous as that sounds, this sort of logic is the reason we have the Election Integrity Commission.

Trump absolutely believes he won the popular vote in the election, his hubris will not allow any other explanation. He said as much on any number of occasions. Each state is in charge of how they choose to assign their Electors, as is expressly declared by the Constitution of the United States. Without exception, they use popular voting as this method.

The various states don’t believe there is any significant voter fraud. There is certainly no evidence of widespread voter fraud. Therefore, they are largely refusing to turn over to the federal government any of the information they have gathered in regards to voting. They view it as an overreach. I agree.

The problem here all stems from circular reasoning. Trump believes something for which there is no evidence. This becomes a problem for a man with an apparently unshakeable belief in his every pronouncement. When we say something that is wrong, our first tendency is to attempt to support the statement when others refute it. When the person trying to support an almost certainly suspect premise is in a position of power, we get things like the Election Integrity Commission. If this doesn’t worry you, then you’re reading the wrong blog.

A person who appears ready to violate the Constitution of the United States in a vainglorious attempt to support what is almost certainly an untrue statement is a dangerous figure. I realize that I’m stepping on dangerous legal grounds when I assume the request made by the commission for information about the voters in the various states is unconstitutional. I don’t have a background in Constitutional Law. I could be wrong about a legal violation but I’m certain I’m right about a violation in spirit.

The federal government is not supposed to be meddling in how states run their elections and for good reason. How an election is conducted is under the purview of the state.

I’m not completely naïve, I know the United States has had special commissions created not to find truth, but to spread unwarranted seeds of doubt. That being said, this is the first time I recall such an investigation being a direct attempt to prove as true a presidential misstatement. This is the first time I’ve seen Circular Reasoning from the President of the United States send so many people scrambling into action.

The danger here is manifest. If the government feels obligated to force its version of the truth on the people of the country, we are living in dangerous times. Trump, or any other politician, can say as they please, it is only when their actions threaten me that I become alarmed. What concerns me about this is not so much the Election Integrity Commission, it is certainly stupid and I’m glad most states are refusing to cooperate, but the long-term implications of a head of state who not only cannot admit a mistake, but must manufacture, via dubious Constitutional actions, a truth that fits the narrative.

I hope it concerns you as well.