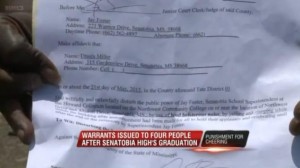 There’s an interesting story hitting the news about three people who have been served with a summons for misdemeanor disturbing the peace after cheering at a graduation ceremony.

There seems to be pretty passionate and high levels of disagreement about whether the charge was appropriate under the circumstances.

Some think that the charges are ridiculous and that Senatobia school district Superintendent Jay Foster is a power mad educator forcing his view of the world on a few parents who dared commit the crime of cheering their children at graduation.

Others believe that Ursula Miller was well aware of the rules prohibiting cheering while the students were receiving their diplomas. The rules stated clearly that all cheering be reserved until after all names had been called. Miller states she was aware she was breaking the rules and assumed that she would be asked to leave, which she was, but had no idea criminal charges would be forthcoming. Many think she knowingly broke the rules and should be punished.

Those who think Miller should not be charged largely come in two groups. Many say she was clearly rude and disrespectful to all the other students but her rudeness does not amount to criminal behavior. The other group thinks parents and family members should be able to cheer all they want when their loved one’s name is called.

Those who think it is a crime largely have seen high school graduations deteriorate into screaming contests in which one family tries to outdo the other and the kids getting their diplomas are largely overlooked in all the cheering.

I place myself with this group. I didn’t much care about my high school graduation but listening to the screaming and yelling of a few families drowning out the calling of my own name did rub me the wrong way. I wasn’t furious or anything but I did think about the abject selfishness of their behavior.

I recently attended my nieces graduation and they clearly stated, multiple times aloud and in the literature, that no cheering would be tolerated until after all names were called. This rule was followed universally without issue.

The reason I’m in agreement with Superintendent Foster is that a simple summons for a misdemeanor is an appropriate punishment for the behavior. Miller did disturb the peace of all the other students and parents. The punishment is potentially $500 and up to six months in prison. I would imagine a far lesser sentence will be apportioned by the the judge.

I think the crux of the issue is if what Miller did was just rude or illegal. I dismiss those who think everyone should cheer as much as they want at such an event. It is incredibly rude at the very least and not an expression of joy. It is an expression of selfish disregard for anyone else. It is simply yelling out “Me, Me, Me.” Nothing more and nothing less.

The question then becomes if such behavior was illegal. Did she disturb the peace. Should disturbing the peace be a crime at all.

My answer is straight forward. The legislator of the community in question has legally passed an ordinance and a crime has potentially been committed. The Constitution of the United States is silent on the subject of cheering at graduations. Therefore it is up to the community. A judge will decide if the law has been broken or not.

If the judge agrees with me, I suspect next year the ceremony will be much more dignified. Good.