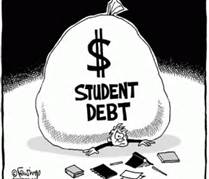 Former Secretary of Education William Bennett is out promoting a new book and in a recent interview talked about how a college education is hurting more people than it is helping. The book itself looks at various colleges around the country and tries to determine if they give value for their investment. I have not read the book but its results are no secret. That only a few colleges and a limited number of degrees are worth the investment of both time and money. Not having read the book I can’t speak to the methodology of making the evaluations but the result certainly seems accurate as to what I see in the world.

Students are coming out of college, even with a degree, unable to gain employment in their field of choice. Over 40% of students simply drop out of college. I’m an excellent example of that group. I didn’t have any idea what I wanted to do with my life and simply milled around for four years before calling it an education. Happily I chose a university, the University of Idaho, that didn’t charge huge fees and I was able to finish without debt. That’s not the case for the majority of students today who are leaving school with large amounts of debt.

In the interview Bennett talks about how he thinks college should be about teaching young adults how to think and that his own degree was in philosophy. I think even the strongest detractor of the current college education system would agree that learning how to think properly is a useful trait. The question becomes; is college a viable place to gain this skill? At this stage, with the price of an education going up and up, I think the answer has to be no. That’s a real shame. I’ll leave it to the book and Bennett to provide the arguments against going to college and I’ll take this opportunity to offer some ways I think we can improve the situation.

One of the most important things we can do is stop insisting that everyone go to college. It’s fine for me to spout off that people don’t need to go to college but what alternatives are there for people without degrees? I blogged just the other day about how people need to be intelligent to hold down a job in modern society. I think education is an increasingly important player in keeping the United States powerful. So, how is this accomplished except through college?

I’m of the opinion that a system of apprenticeship is an excellent tool in this regard. In Germany they have a strong apprentice program. I’ve worked with steel mill employees in Granite City who go to work immediately after high school and eventually rise into high-paying, skilled jobs. The idea is that someone who isn’t really interested in a higher education can immediately go into the workplace and learn a job. Many times the employer will not only pay the apprentice but encourage them to continue their education as well. This is a winning system in that young people are gainfully employed while learning a skill and companies have eager employees, with lower salaries, who move up in the company internally to higher paying jobs.

This system certainly cannot replace a degree in Philosophy or Engineering but it would dramatically cut down on students who didn’t really want to go to college in the first place. Even for degrees like engineering a student might well start out at a low-level job with a technical company and go to school part-time while working with skilled co-workers.

I think this would also have the benefit of alleviating high schools from having to prepare students for college and allow them to return to what many call a classical education. We could dispense with ridiculous testing and standards and get back to teaching kids how to think properly.

This is a hugely important issue in relation to the United States’ place in the world. If we continue to churn out people with a college education who cannot hold down a job, our nation is in peril. More disability, more welfare, less work, less excellence. The rise of a class system of haves and have-nots. This is a recipe for the decline of our nation.

Tom Liberman
Sword and Sorcery fantasy with a Libertarian Twist
Current Release: The Sword of Water ($2.99 for 300 pages of neck snapping adventure)
Next Release: The Spear of the Hunt