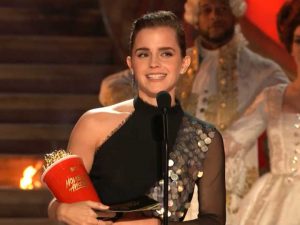 Emma Watson played the character of Belle in the hugely popular and well-reviewed live action Beauty and the Beast movie. It’s not a huge surprise that she won the Best Actor in a Movie category at the MTV Awards show. Well, wait, yes, it is. Best Actor in a Movie? Yep, no more Best Male Actor and Best Female Actor and that’s got some people jumping for joy and others up in arms in rage.

Gender neutral awards. That word, gender, is a bit of a buzzword these days. Gender neutral. Same sex marriage. These are topics people feel strongly about and I suspect they are carrying those passions into this particular situation. They believe this yet another attack on what they consider their moral imperative. I don’t think it is. I think it’s a long overdue change.

The question I think is most pertinent is to wonder why we have any gender, race, creed, religion, or age specific awards? Is there a Best Male Actor Over the Age of 65 with Yellow Skin who Believes in Jesus as His Savior category? Of courses not, nor should there be. It seems self-evident to me that in a field like acting, gender has no role in excellence. The gender of the actor in no way gives them an advantage or disadvantage.

Many gender related restrictions are designed to allow women to participate. If there was no women’s basketball team, then there would be few women basketball players. Men are bigger and stronger than women and this gives them an inherent advantage. We’ve long seen that a woman who can compete with men is allowed to do so. We have hockey goalies, placekickers, pitchers, golfers, and other athletes who are women competing with men quite well. As they should. What we’re trying to avoid is bigger and stronger men competing and dominating physical events designed for women. That is also reasonable. We have the Special Olympics for mentally disadvantaged people. That also makes sense.

Where there is no inherent advantage, I’m convinced we should eliminate any gender based consideration. I don’t even see how this is controversial. It seems so obvious. Both men and women should support this even though their competition will now be doubled. There will be twice as many people competing for the same number of awards.

Think about what drives us to be our best. It’s competition. When we must compete against others we get better. If you increase the competitive field, the only result is the best has to be even better. We all benefit from this competition in any number of ways.

I strongly suspect people on both side of the political aisle will not like this idea. There are so-called Liberals who will note women will not win as many awards and be angry. There will be so-called Conservatives who think this is an attack on their moral and religious beliefs.

This united front convinces me even more that I’m correct, that MTV has done the right thing.

We should all be judged by our ability. This is the heart of equality. I’m all for that.