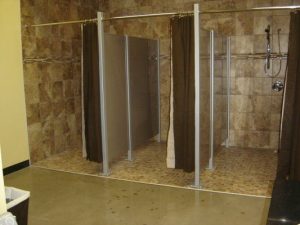 Farewell, Shower Eight. I will miss you. For the last year and half, since my retirement, I’ve been going to the gym in the morning. This means I shower at the gym after my workout six days a week. There are about a dozen showers available but only one stole my heart: Shower Eight. Sadly, my gym is moving to a new location starting Monday and today was my last shower at the current site.

Shower Eight has many excellent qualities and I will miss it. The water pressure is just right. The temperature is steady. The handle is firm and does not slip. The drain works perfectly and water doesn’t pool at my feet, an issue because I shave in the shower and tend to be in there for a while.

Oh, Shower Eight, I will miss you. Nothing makes me appreciate the glories of Shower Eight more than those few times one of my fellow Wellbridgedonians is using the shower and I am forced to use another. Shower Four with its skin peeling water pressure I do not like you. Shower Six with temperature that goes from freezing cold, to scalding hot, to a pleasant in between without notice and with unfortunate frequency, you do not capture my affection. Shower Twelve has many fine qualities. Good temperature, nice pressure, but your handle is loose and, in my luxuriating, I can sometimes bump into it, thus spinning it forty-five degrees to a temperature that is unsafe for human bathing.

It is you, Shower Eight, that I will miss the most. You cannot return my affection, not having a brain and all. It won’t miss me. It doesn’t smile with joy in the morning when I approach in the same way I do when I see it is empty and ready to plunge me into watery delight.

Oh, I’m not saying things were perfect. There was that week it sprang a leak on the shower head and sprayed me down with icy water before it had a chance to warm up, but soon enough that was fixed. I admit there was a time or two when the drain wasn’t functioning with its usual alacrity but I blame some of my more ursine companions at the gym for this problem, I don’t blame you, Shower Eight. Once the handle was rather loose but that problem was also quickly resolved. I choose to forget that horrible day when the shampoo dispenser was broken and I was forced to wander, wet and bare, to another stall to scoop up a handful of the necessary substance.

Still, there are bumps in all relationships and Shower Eight had fewer than most. I forgive.

Oh, Shower Eight, I shall miss you. I have no illusions about the fate of my friend. The building is to be torn down, Shower Eight will not be moved in total to the new location. I will have to find a new friend, a new watery companion. I can only hope I find one as good as you.

One thought on “An Ode to Shower Eight”