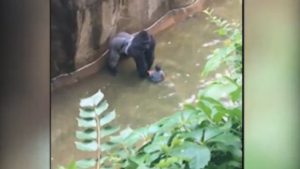 A tragic incident occurred recently in Cincinnati that is making headlines and evoking passionate debate among many people.

A young boy willfully climbed into the gorilla pen at the Cincinnati zoo and when a male gorilla named Harambe started to become more aggressive, the zoo’s Dangerous Animal Response team shot and killed the gorilla.

Passions are running high among those who think the zoo did the right thing and those who think the zoo handled the situation improperly. One of the positions I see being taken is that the zoo is responsible for the enclosure not being secure enough to prevent entry and they are to blame. That all the enclosures must be designed to prevent anyone from entering. That’s the argument I’d like to look at today.

What I want to talk about today, Memorial Day, is the commonly stated belief that Freedom isn’t Free. I disagree with that idea. I think Freedom is Free. There is nothing more free in this world than freedom. Don’t get me wrong. I well understand that other people desire to take away my freedom. Those other people include both foreign and domestic enemies and my own government. I understand that to protect my freedom people must make sacrifices. I do not disregard the sacrifices made in order to protect me and others.

That being said, Freedom is mostly certainly free. It’s just quite dangerous. It might be possible to make every zoo enclosure more difficult to penetrate but there is no way to have a zoo and also have it so that a determined visitor cannot gain access to an exhibit. It is in the nature of a zoo where wild and dangerous animals are kept that there will be danger. Certainly the zoo should make efforts to keep the enclosures and wild animals separate from the visitors but if we want to have zoos at all, we must face that fact that a determined child or adult might be able to put themselves in danger. That’s freedom.

We could make it more safe, certainly. We could make zoos illegal altogether. We could insist that zoos spend astronomical sums of money to enclose every exhibit in bullet proof glass.

We could remove all traffic signals and thus be more free to drive as we will without restrictions. Or we could pass more and more traffic laws. We could put monitors in cars to prevent any sort of dangerous driving. The choice between freedom and safety is a serious one.

Those who wish to take our freedom often guise their desires with soothing words about only doing it to protect us.

My point is that we must accept danger if we love freedom. We must understand that terrible things can happen. That the government and the zoo cannot completely prevent horrible outcomes. We must mourn the death of Harambe. We must accept the danger if we are to remain free.

The alternative is to be perfectly safe at all times … in our locked and hermetically sealed chamber.

What will you choose?