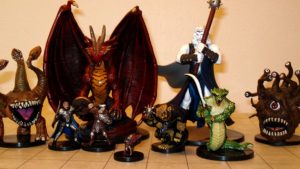 A story that hits me in my proverbial breadbasket just came across the wires. The Waupun Correctional Institution in Wisconsin banned playing Dungeons and Dragons (no word on Pathfinder) by inmates.

I’m a role-playing game enthusiast to say the least. I love playing such games. I think it’s ridiculous that those in power think playing the game might encourage escape fantasies among the inmates. I imagine the escape fantasies are already on their mind. A fellow named Kevin T. Singer is incarcerated at that institution and had a regular Dungeons and Dragons game with fellow inmates.

Let’s cut to the chase. Prison officials do not believe that playing Dungeons and Dragons constitutes an escape or violence risk. They just wanted to make life more difficult for Singer. They found a ridiculous rational for doing so, implemented it, and laughed as they took away his books and homemade material. Ha, they said, we’re in charge and we get to tell you what to do.

The courts agreed. Even though there is no evidence that such games cause troubles in prisons (because they don’t), the court sided with the prison.

Sadly, I agree with the courts. The removal of role-playing games is something the prison can enforce. The inmates have been duly convicted of a crime. A particularly brutal murder in this case. The authorities run the prison and unless they are taking away a Constitutionally guaranteed right, they can do as they will.

My message today is for the prison officials. You are not making Wisconsin or this nation any safer. By using your power to bully and punish a prisoner, for the simple reason that you can, you actually increase the chance said prisoner will learn to hate authority figures all the more. The prison should run the damned game, if you’ll pardon my choice language. They should encourage inmates to work as a team and learn to appreciate those in authority don’t have to be jackbooted thugs. That they can actually be interested in the well-being of their charges.

Being in a position of authority is a tremendous responsibility. You can influence people in a good way and make this world a better place or you satisfy your sadistic urges to hurt and demean people.

I’m certainly not saying Singer is a wonderful person. The fact remains that he and other prisoners may someday return to society. Isn’t it in our best interest to make sure they return better than they went in, not worse?

One thought on “Wisconsin Prison Bans Dungeons and Dragons”