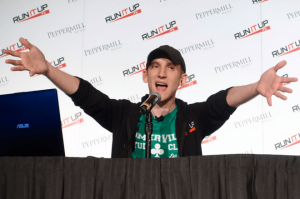 I’ve been watching people play poker on twitch.tv lately it’s got me thinking about some things.

I started watching a fellow named Jason Somerville and then also began to follow two other players, Lex Veldhuis and Parker Talbot. All three are extraordinarily good players and also entertaining personalities who explain their decisions in an informative way. Somerville in particular is a highly watched streamer who does an exceptional job teaching the game and also entertaining the audience.

So why the blog? Good question. After watching all three of these very strong poker players play for many hours I realized they aren’t winning much money and on many days losing money. That’s not to say they aren’t making money by the end of the year but what I saw was them playing for many, many hours in long tournaments with thousands of players (called Grinding in poker vernacular) for a small return on their hours of investment.

Then, for a change, I watched a few other plays who clearly did not possess the skill or temperament of Somerville, Veldhuis, and Talbot. Not only were they spending hours and hours playing, they were largely losing money! And quite happily I might add.

The first lesson I took from all this is that I have no business sitting at an online poker table. Even if I’m at a small stake tournament, some can be entered for as little as a dime, I’d merely be spending a lot of time and losing money. I have literally no chance to win against more skilled opponents. The more I would play, the more I would lose.

It quickly became clear to me that the vast majority of people playing poker online are either losing money or earning money at a rate far below any minimum wage job. So why are tens of thousands, if not more, people gleefully doing so?

I think it can be argued that the allure of riches plays a part but I don’t think that’s the primary reason so many people are attracted to online poker. While the riches are certainly there it is not the same as purchasing a lottery ticket. In order to get the riches hard work is required.

What I think is going on is much deeper. It taps into why I’m a Libertarian and also into very nature of what it is to be human. We want to be free. We want to work hard at something we enjoy and be rewarded for doing so. Those things bring us happiness and joy.

After watching Somerville, Veldhuis, and Talbot for many hours some things became very clear to me. All three are not simply dolts who happen to be good at poker. All three are highly intelligent and thoughtful. They spoke of subjects beyond poker with strong words and rational logic. It is clear to me that all three would be successful in whatever endeavor they chose, they just happened to have picked a field they enjoy and at which they excel. Wise choices, my friends.

And a shining example for the rest of us.

Do what you love. Work hard at it. Be pragmatic in your decisions. You’ll be happy, perhaps rich or perhaps not.