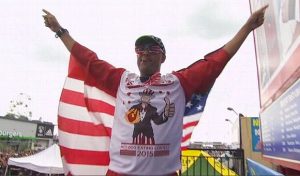 I made my weekly (sometimes more) trek down to the corner bar and it was a slow sports day. The Cardinals won an afternoon game and France defeated Germany in the Euros early in the day. So what was showing on the television? Nathan’s Hot Dog Eating Contest.

The contestants were brought to the stage with all the fanfare of a NFL game and one of them caught my eye. Yasir Salem.

Mr. Salem is clearly of Arabic descent and was decked out in the stars and stripes as he ran to the stage and preened before the adoring crowd.

Yasir didn’t finish in the top four but that’s ok by me.

What made the United States of America great in the first place is everything Mr. Salem represents.

What is your religion? Who cares.

What is your skin color? Who cares.

What is your sex? Who cares.

Can you eat more hot dogs than the other guy, hell ya. That’s what matters. That spirit represents exactly why this country achieved greatness in the first place.

Let’s try not to forget it.

I’m telling you now and I’ll tell you tomorrow. Everything Mr. Salem represents is what will make America Great Again far more than any politician you will vote for in November.

One thought on “How Yasir Salem will Make America Great Again”