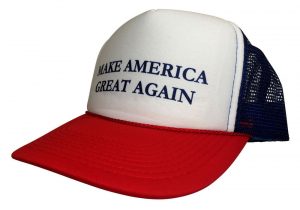 I just read an interesting article that is a mix of clickbait and excellent writing. At the heart of the article is the idea that products available to consumers around the world are almost impossible to define as Made in Wherever.

The headline attracts readers who are eager to learn that Donald Trump hats proclaiming Make America Great again and sporting a Made in America label are, in fact, at least partially produced abroad. Once you get past the political nonsense there’s an important and interesting message in the well-written article.

The problem is tracing the origin of all the materials needed to make a single product is not easy and in most cases simply impossible. Oil is used to make many things besides gasoline and certainly gasoline is used to transport the products from the factory to the store. The origin of this gasoline is impossible to trace. The oil came from the ground but it was shipped, refined using chemicals, shipped again, and eventually arrived at the pump. The same is true for virtually everything you purchase.

The article goes into detail about how even with microscopic examination of the threads used in the Trump hats its pretty much impossible to tell where they came from. It’s possible to rule out certain threads and one of the Trump hats was made from thread not in the lots it reportedly came from. But that’s totally beside the point.

The point is that we have a global economy. There’s no way around it. Raw material is mined or produced all over the world. It is then shipped to another location to be processed. Then parts are shipped somewhere else to be assembled. The assembled parts then go to a warehouse somewhere and are eventually shipped to a store where you purchase it at a low price. That low price is absolutely a product of the global economy. Without it prices go up and you cannot afford the things you currently enjoy. That’s reality.

Made in America is meaningless. There’s no way to ensure it is accurate nor should we care if it is. Is the product in the store the one I want at a price I can afford?

Made in America doesn’t keep jobs in America, it doesn’t improve the American economy, and it most certainly does not get you a better price on the goods you desire. Products largely produced in China create and maintain many, many jobs here in the United States.

I’m saying I want the best product at the best price and the global economy provides that far better than any local economy.