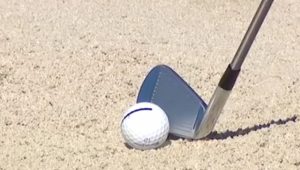 The United States Women’s Open golf tournament was held this weekend and it was shaping up as a very exciting finish before something terrible happened.

Two players were involved in a three-hole playoff to determine the champion and one of the players, Anna Nordqvist, hit her ball into a sand bunker. This is in golf parlance a hazard. When in a hazard it is against the rules to ground your club. This rule exists for a very good reason. It is entirely possible to altar the condition of the hazard by pushing down with your club and easing the eventual path to the ball.

Nordqvist took her shot and grounded her club every so slightly dislodging the smallest of clumps of sand. No one noticed it at the time. The two women parred the hole leaving them tied going to the third and last hole of the playoff. Both women hit their first and second shots to the par 5. That is when a video review noted the infraction. Both women were ready to hit their third shots but Nordqvist was further away so she hit hers without the knowledge that she was actually two shots behind. Her competitor, Brittany Lang, was informed of the infraction before hitting her third shot.

I’ve written about golf infractions in which the penalty was assessed after the fact in regards to Tiger Woods and Dustin Johnson if you wish to see my earlier thoughts.

This latest incident brings into even greater clarity the problem of reviews after the fact. Everything that happens after the incident in question is subject to change. Both Nordqvist and Lang would not have played the remainder the 17th hole and the start of the 18th hole in the same fashion if they knew about the infraction. The fact the USGA informed Lang of the penalty before her third shot but not Nordqvist until after her third shot makes it even more egregious.

In all other sports replays must be adjudicated before play continues. It is clear this is necessary. Everything after the incident is subject to change.

I know people won’t like that. You will say, “But Tom, what if the player knew they broke the rule but rushes to make the next shot before anyone notices?”

I say that is exactly what happens to replays in the NFL and NCAA all the time.

I also completely understand wanting to get the call correct in the end. I’m a big believer in replay and getting the call right. But it’s vital to stop the match immediately if there is a question. It’s just unfair to everyone else if you allow people to continue playing with the actual result subject to change.

Nordqvist is showing great sporting spirit by not blaming anyone or complaining but the reality is this win is unfortunately tainted. Lang did nothing wrong and is a deserving winner but if both players knew of the infraction before continuing the result might well have been different. What happened is unfair to both.

For my knowledgeable golf fans I know you are going to mention the Craig Stadler towel incident. In light of recent events I now think he should not have been penalized.