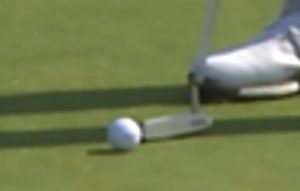 There is a huge controversy going on right now in the U.S. Open.

The Rules of Golf state that if you cause a ball to move you are assessed a penalty. If the ball moved through some other agent it is not a penalty. Dustin Johnson was leading the U.S. Open when his ball moved. It was determined he did not cause it to move and thus he played it from the new position. Then, after watching some video, someone at the USGA, the organization that runs the U.S. Open got scared. What if Johnson did cause it to move? People will blame us!

Fear then ran through the organization much like poop through the proverbial goose. We have to make sure we’re not blamed if that happens. Panic spread like wildfire. In that panic someone made a very, very bad decision. They decided to inform Johnson that he might be assessed a penalty. This while he is still on the course!

His competitors know nothing of this although it’s likely word has filtered to them through the crowd. It changes the way everyone plays their remaining holes. It changes everything. It’s a disaster.

Would we expect any other sporting event to do as much? Well, St. Louis Cardinals. It looks like that run you scored may not count but go on and keep playing anyway. We’ll tell you what we decided after the game? Idiocy!

I’ll lay it out for the cowards at the USGA. Make a decision and stick with it. If it turns out to be wrong later, take the heat.

Today is Father’s Day and the USGA is acting like a scared child. Shameful!