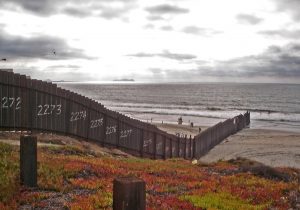 With the election of Donald Trump the idea of building a long wall along various places on the border between Mexico and the United States is being seriously discussed. The primary method of paying for this is something being called Remittance Seizures. I call it stealing.

The idea is that people send money to Mexico from that which they earn in the United States. Someone working in the United States earns money. They frugally save some of that money. They send it back to their friends or family in Mexico. What is being proposed is that the government simply takes a percentage of that money. That’s theft, plain and simple. There’s no other word for it.

The United States government is going to spend a bunch of money building something but they don’t want to use general tax dollars for the purpose, so they steal the money from a particular group of people hoping that the rest of the country will shrug and say, “well, it’s not my money they are stealing.”

If the federal government is allowed to do this, how long do you think before state and local governments start to fund their own little projects by stealing from you?

In my community of Libertarian and Anarchists there is a mantra that taxation is theft and there is some truth to that idea but I don’t want to muddy the crystal clear waters of this plan. If you want to propose and enact a tax in order to get money to build the wall I think it’s stupid but at least it’s legal, it’s not stealing.

This proposal is an extension of government power that should frighten everyone. This is no different than if you built a fence around your property and then went to your neighbors and took part of their paycheck to pay for it. It’s madness.

I’m not totally opposed to taxes. I drive on roads and a gas or mileage tax to pay for upkeep of the road makes sense. This is simply targeting a minority group and taking their money to pay for something they don’t use and certainly don’t want. It’s theft. I can’t say it more simply. it’s stealing from a group because you can. It’s a despicable proposal.

The words Republican and Conservative have become antonyms in this day and age. It’s shocking to this Libertarian.