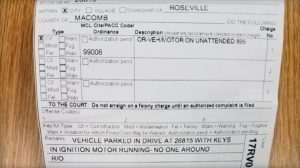 There’s an interesting story making the news regarding a fellow named Nick Taylor or Taylor Trupiano (depending on which article you read) who was ticketed in Roseville, Michigan because he left his car running and unattended in the driveway of his girlfriend’s home.

The reason for the law, according to Roseville Police Chief James Berlin, is that thieves sometimes steal cars that are left in this state, usually during winter months. Cars thus stolen must be dealt with by law enforcement officials. The police must investigate the crime and track down the criminal and might even have to engage in high-speed chases. The investigation costs money and the chases are dangerous to bystanders. Chief Berlin is unabashedly a supporter of such laws.

You all know me by now. I’m a Libertarian. I think the law is ludicrous but let’s take some time to examine why.

Let us take Chief Berlin’s assertion at face value. There are cars stolen in this manner. Investigating such events does cost money. A high-speed chase might result.

Let’s also take a look at some Libertarian points of view on the subject. Leaving a running car in your driveway hurts no one directly. It is a convenience in cold weather. It is your car. It is private property.

His first argument is largely that the law is designed to protect people from themselves. You might get your car stolen if you act in a careless fashion. I don’t think the state should be protecting us from our own stupidity. If we are stupid and do stupid things that is our business. Would we want police officers to fine someone wearing a nice watch in a bad part of town? The crime is committed by the thief, even if we act irresponsibly and put ourselves in dangerous situations. That’s our business, not the state’s business.

His second argument is that it costs money for the police to investigate crime. Yes. That’s true. That’s their job. People pay taxes to support the police force in doing this job. We should not be taxing through citation. This problem is largely created by municipalities that fail to fully fund their police force and use it as a cash cow to rake in revenue for City Hall. Which is, of course, the real reason behind the ordinance, not that Chief Berlin or the Mayor of Roseville would ever admit as much. Fully fund the police force. If crimes occur they will attempt to solve them. I certainly wouldn’t object to community outreach to explain not to leave your car unattended because it invites thieves.

His final argument is that high-speed chases endanger the public. He’s right. They do. And police should not engage in such chases for the safety of the citizens of the town and the officers themselves. Chases make sense when the criminal is violent and dangerous but do not make any sense for a car thief. Yes, the thief might get away. That’s true. But also: Yes, innocent people and officers themselves die in such chases. They aren’t worth it.

There are a lot of factors that go into such ordinances as we see in Roseville but as a Libertarian I cannot countenance them. Bad laws make people hate police officers. And that’s something law enforcement agencies would do well to consider.

When police work with the community both are served.