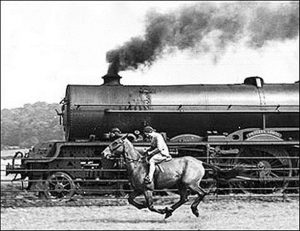 I’ve seen quite a bit of debate both in person and online about the idea of Protectionism and why we either need to avoid it or embrace it. I find that people who believe one side of the argument seem to be largely immune to attempts to convince them otherwise. As you might imagine much of this debate is fueled by the current political climate in the United States.

President Trump is a strong protectionist. He believes that we must protect our workers from foreign depredation. On the other hand we have Libertarians like myself who believe in Free Trade. What I’d like to do today is not argue with you but ask you to argue my point. Perhaps no one will take me up on it, my blog viewership is somewhat short of the millions. However, perhaps a few people who believe in the Protectionist mantra will be willing to step forward.

So here we go.

Imagine that is not 2017 but in fact it is 1760. Before even the United States existed as a free nation.

Our economy is based almost completely on Pre-Industrial economics. Agriculture is the primary form of employment and wealth generation, as it has been for tens of thousands of years. People are born, live, and die all within fifty miles of a single location. On the horizon is a frightening thing. The Industrial Revolution.

The Industrial Revolution will destroy virtually every single job that exists today. I am a precursor of the Luddites. I believe this new way of doing things will destroy my family and my life. I will no longer be able to work, to make money. Tell me why I should embrace textile manufacturing, metallurgy, steam power, machine tools, chemicals, cement (my job is a brick layer), gas lighting, glass making, paper machines, automated agriculture, mining, canals, roads, railways.

These things will destroy my family. My children will work in a factory instead of providing subsistence farming at home. I don’t know the skills required to live in this coming world.

I will suffer. I will not have a job. You, the government, must protect me and my job from this new way of doing things. I don’t know how to write code, I mean fix a steam engine. Explain to me how it could possible be to my benefit, to my nation’s benefit, to the world’s benefit to move from pre-industrial to industrial. Why should we not fight this?