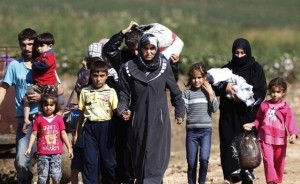 The Syrian Refugee crisis is in the news for a number of reasons but the one I am going to talk about today is the question of whether or not to allow them into various countries.

One of the main reasons this has become such an issue is that one of the murderous scum in the recent attacks in Paris was a refugee. This fact has caused a number of governors and other people in the United States and Europe to advocate refusing said refugees, send them back from whence they came. The fear being that more terrorists under the guise of being refugees will sneak into the country.

The danger of this is real. We cannot discount the fear espoused by those who do not want the refugees for this reason. Any terrorist who wanted to gain access to another country might well use the refugee crisis as a method to sneak in. Not only might they, at least one has.

So we admit there is a danger. By allowing refugees into the country we might allow a terrorist in. It’s also possible that the refugee might sometime in the future commit other crimes. Perhaps they will rob a store ten years from now. Again, this is not an idle fear. This is real. There is no doubt that some of the people who are allowed into the country will commit crimes at some point in their lives. By allowing such people into our country we certainly increase the danger we face. One cannot deny this is true.

The question I ask myself is what is the result of not allowing refugees into various countries? It’s important to understand the answer to that question before we can decide if we want to allow them in at all.

Up to four million people have fled the ongoing conflict in Syria into neighboring countries. What would happen to those people if they stayed in Syria?

Many would die, of that there is no question. The warring factions in Syria have little regard for human life. Those that survived would join one of the various warring factions. Some would join the Syrian government forces. Some would join ISIL. Some would form their own factions. Many of them would become radicalized. The children growing up in such an environment would learn death. They would grow up filled with hate. They would become the next generation of terrorists. We will create tens or even hundreds of thousands of hardened terrorists who hate the countries that refused them and caused the deaths of their families.

There is also the ethical point of view. By refusing refugees we condemn many of them to death, maiming, or miserable existences in order to procure a modicum of safety for ourselves.

One must remember that there is an upside to allowing in refugees. Here in my home town of St. Louis we embraced many Muslims from Bosnia during the civil disorder in that country. They have formed an amazing community here. Did some of them turn out to be criminals, certainly. Did some of their children grow up to be criminals, no doubt. But the vast majority are excellent citizens who not only contribute to the community but are grateful for our generosity. Who tell their family and friends who remained behind what a wonderful country they live in. A country where people of different religions, ethnic backgrounds, races, and skin color get along without murdering one another. A country where a more divisive question is if you root for the Cardinals or Cubs.

There are no simple answers to difficult questions. You must examine the reality of the situation. You must determine how much safety you are willing to give up to help those in need. You must ask yourself how many terrorists you wish to spawn upon future generations for your safety today.

I know what my decision would be but your life is your own to lead.