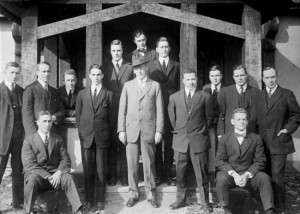 I just read an interesting story about how students at Princeton are demanding the school remove the name of Woodrow Wilson from various buildings and programs.

For me it brings up the question as to whether erasing history is a better solution than understanding it. I think you can probably guess my opinion on that subject. Let’s examine the story first.

President Thomas Woodrow Wilson was many things including, President of the United States during World War I. He was also the President if Princeton. He was very effective in both positions. He managed to institute massive changes while in power working to bring together disparate points of view into acceptable compromises.

He instituted many policies some of which are reviled and some of which are hailed as having allowed the United States to become a world power. His racial thoughts were a mixed bag. He opposed slavery on economic grounds rather than moral ground. He certainly discouraged black students from applying to Princeton. The leader of the NAACP, W. E. B. Du Bois, was a supporter of Wilson.

To put the question more personally to me; am I offended by many memorials to Ulysses S. Grant? Grant issued the infamous General Order No. 11 which ordered the expulsion all Jews from military districts.

I must ask myself if I am diminished by the fact that there are many memorials to Grant. The memorials do not lessen me by honoring their arguably anti-Semitic founder. I am the one who takes offense. I am the one whose feelings are hurt.

Should we simply wipe the knowledge of Grant’s existence from every public place? Should we raze all pieces of art depicting him? Should we pretend he didn’t do the things he did because he also did awful things?

No one is all good or all bad, not even Adolph Hitler. The founders of our nation were largely, with a few notable exceptions, racist slave owners.

Will taking the name of Grant off a building erase his contributions to our nation? Should we only honor people who did no wrong in life? Can we not acknowledge and honor the good while still recognizing the bad?

The question for Princeton administrators is to ask themselves if they are willing to remove the legacy of the man who did so much for them, despite his flaws.

On a much broader scale I must ask myself if erasing the names of people who did wrong from memorials is helpful. My answer is no. It’s much better to let plain truth shine through, though it may be painful.

I am not offended by Grant’s name being honored in memorials. I think it rather self-centered for anyone to be so angered, Jewish or not. Grant did nothing to me and the honors being given are based on other things the general accomplished. That being said, I also think people should know about General Order No. 11. It happened. It was awful.

There are many who try to pretend their heroes did no wrong. They attempt to hide the misdeeds of those they generally admire.

Those who wish to take Wilson’s name off the Princeton building are exactly the same as these people, just in reverse.

No, I say. No. Honor the good, acknowledge the bad. They are not mutually exclusive.