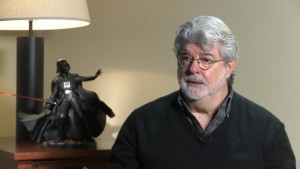 George Lucas claims he doesn’t want to be involved in any new Star Wars film because all he gets is criticism.

At first I wasn’t going to blog on this subject because my reply to this thought process can be summed up with four simple words: Make a good one.

Then I started thinking about Lucas’s complaint in the broader terms of what I see in the news, in my daily interactions in life, all around me, and something I myself fall into not infrequently. Perhaps it is part of being a human being.

It is a twofold issue. First there is the fear of failure. We don’t want to try something at which we’re not particularly good, simply because we know we will likely fail. Failure isn’t fun although it is a necessary building block to success. While this is true, it’s not the main focus of my blog today because I don’t think that is what is going on with Lucas.

The mentality with Lucas is, in my opinion, he thinks he has made good films but that he can’t satisfy everyone. That the criticisms of his incredibly crappy Star Wars films is unjustified and there is no point in making more. If people don’t appreciate it, that’s their fault.

I’m an abrasive person. If someone says something stupid in front of me I’m not good at hiding my contempt. When that person becomes aware that I’m calling them stupid they invariably get angry at me. I probably deserve some anger but the reality is that the person who does the stupid thing should be called a moron. The director who makes a bad movie should be told the movie sucks.

And the reaction we should all have when we’ve said something stupid or done something stupid is to get mad at ourselves. We’re the culprit. We’re the one’s who did the thing that deserves the ridicule. This is not easy. Our ego is heavily involved. But such self-examination is necessary for growth.

That’s the crux of what Lucas is saying. I make fine movies but everyone hates them. If everyone hates your movies there’s a good chance they just aren’t very good.

Very few people have purchased my books but those that have generally say nice things. I’ve gotten some mild criticism in the past but nothing like the things Lucas faces. Should my books start selling by the millions I’m sure there will be people who don’t like them. They won’t hesitate to tell me and everyone else.

My job at that point will be to listen to their criticisms and, if they are valid, try to write my next book better.

My book The Black Sphere had a bit of a confusing ending according to the first couple of people that read it. I went back and clarified it. That’s how we get better in life, that’s how we become a better person.

I guess the bottom line is that we shouldn’t give up. We should always try and do whatever it is we’re doing a little better.

Star Wars is an awesome movie. I’m happy to see at least someone hasn’t given up on the franchise!

May the Force be with you.