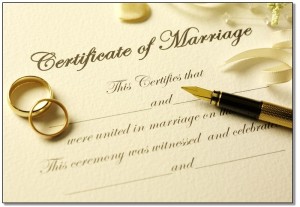 I’ve followed the Kim Davis story with moderate interest and most people seem to think there are two sides to the issue. I disagree. I think there is a third point of view that makes the first two irrelevant.

Why do we need the government to issue a license for two willing, legally competent, adults to sign a contract? Why? I ask a third time because it is the most important question in all of this. Why?

If you come to the conclusion that the answer is simply, “We don’t.” You have solved the entire problem.

Those who believe, like Davis, that it’s immoral won’t have to sign such a license because it won’t exist. Those who believe that state employees must carry out their duties without regards to their religion won’t have to worry about it because one of those jobs won’t be issuing marriage licenses.

If two or more legally competent people sign a contract stating they are married, that’s that. No more problem. No more Kim Davis. No more Constitutional debate. If it turns out later the contract is invalidated by law, say one contractor was underage, then the marriage is invalid. What benefit is there in having the state “license” a marriage?