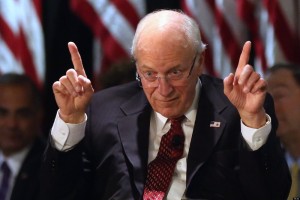 This is the man who sent 4,000 of our best to die in Iraq for nothing, based on a lie. Who is largely responsible for tens of thousands of our soldiers who suffered horrible wounds in a useless war. Who caused the deaths of arguably hundreds of thousands of Iraqi citizens.

This is the man who watched as 3,000 citizens died in the World Trade Center attack and responded by attacking the wrong country, thus pissing on their graves.

This is the man whose friends pocketed millions (perhaps billions) of dollars through no-bid contracts while our soldiers were dying for nothing.

This is the man who, every time he opens his mouth, spits in the face of our service members who trusted him.

The man who presided on the committee to look into President Reagan selling anti-aircraft missiles to Iraq to raise money for the Contras of Iran and thought the committee was overreaching.

There was Hitler. There was Pol Pot.

I’m comfortable saying Cheney is not the worst, most vile and disgusting human being to ever set foot on this planet. I won’t go any further than that.