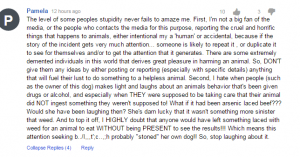 I’m happy to report that my Misleading Headline of the Week and Stupid Comment of the Week come from the same story! That certainly makes my job easier.

Colorado Dog Gets Stoned for Days After Ingesting Marijuana blares the headline from a newcomer to my stupid and misleading headline category, Complex.

The article then goes on to describe symptoms that pretty much exactly match those exhibited by dogs who ingest chocolate.

Most of the comments on the article were fairly spot on in suggesting that chocolate was the cause of the dog’s problems, not the supposed marijuana.

However, an apparent animal lover posted a rant that is fairly difficult to follow because it’s largely incoherent. The gist of it seems to be that the media shouldn’t report incidents of animals being abused by their owners because that encourages people to abuse animals so they can read their stories in the news. Uh … no.

Have a great week!

See you next time with Stupid and Misleading Headlines and Stupid Comment of the Week!