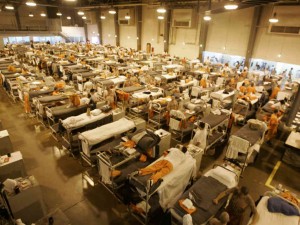 I just became aware of the growing practice in the United States of charging prisoners a fee for each day they stay in prison. The fees are not just for room and board but extend to visitors who are charged for visits. Medical care is billed to the prisoner. Increasingly aggressive bill collection agencies are being used to force prisoners and their families to pay these bills.

Apparently this has been going on for some time now but in recent years the fees have gone up quite a bit. The story describes a man who was attacked in prison and lost an eye. When he sued, the prison hit him with a lawsuit asking for his three year accumulation of fees, $55,000.

There are so many problems with this practice that it simply boggles my brain.

The first thing that immediately comes to mind is that as we continue to make prison a profit center we incentive putting people in prison. It’s clear this is working because you can go to prison in the United States for just about anything these days. Police forces and local governments fund themselves through seizures.  Private prison companies make millions by cutting as many corners as possible and often brutalizing prisoners.

The next thought is if we actually want to release prisoners back into society where they can become productive citizens, having them owe an impossible debt will clearly drive them straight back into crime. It means we don’t really want to release them at all. It’s essentially a Ponzi Scheme. We need more and more prisoners to fund the prison system, eventually, of course, we run out of people to imprison and who is left holding all the debt? The usual suspect, taxpayers. Meanwhile everyone else absconds with all the money. Do they go to jail? Hardly.

Then of course is the simple question of how is a prisoner supposed to earn money to pay for incarceration, while incarcerated? It’s nonsensical.

The only possibility is that the loved ones of the prisoner, who have committed no crime, are going to have to pay. We have now criminalized being related to or friends with a criminal! Take that in for a moment. Think about it.

The larger point here is that we are destroying our nation from the inside. We don’t need terrorists and foreign invaders. Almost 3% of people in this country are under correctional supervision. One in thirty-five*!

CORRECTION: Originally I put 1 in 3 instead of 3%.

At the rate we are going it will soon be more normal to be a criminal than to not be so. It’s already that way for segments of our society.

This must end. In a system that so brutalizes people, often for minor or drug offenses, who is truly the criminal?