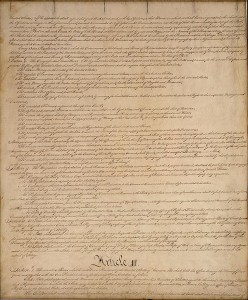 I’m a member of a Libertarian website where they host regular web based shows and I was watching one of these, led by a man named Sheldon Richman, which discussed a Supreme Court case that caused a great deal of debate among Libertarians when it was adjudicated. I do not wish to discuss the case but an assertion made by Mr. Richman during his show.

It involves the nature of the meaning of words and the nature of interpreting the Constitution of the United States. In this case the debate came about over what is called the Taking Clause of the Fifth Amendment.

The key phrase being … nor shall private property be taken for public use, without just compensation.

Mr. Richman interpreted the last two words to mean whatever the seller demands. Legal scholars disagree. They have said repeatedly in law that it means the value lost by the current owner of what was taken.

In this blog I do not even mean to debate the meaning of those two words. Where I absolutely disagree with Mr. Richman is his assertion that we must use a textual, or possibly even strict constructionist interpretation of that document. That is that we must go by the words they used and not read meaning into them.

He argues that those who wrote the Fifth Amendment could have easily written … without fair market value compensation. That because they did not use those words they didn’t mean that.

Here is where I disagree with Mr. Richman. They could have just as easily used the words … meeting the owner’s set price.

They didn’t. They used the words they used. That is what we have. No more. No less.

In this case the Taking party and that who is Taken from are clearly going to be in disagreement, otherwise the Taking would never happen. If the Taker had met the price asked there would be no need for Taking. I’m certain Mr. Richman is wrong and I would guess that he is certain I am mistaken.

In any case, both are interpretations. You might favor Mr. Richman’s or you might, like me, prefer the agreed upon legal interpretation. But you cannot pretend that one is an interpretation and one is not.

You must agree that words have no inherent meaning. They are merely sounds or squiggly shapes. We give the squiggles and sound meaning. To suggest otherwise is ludicrous. It’s not a question of interpreting or not. We are never not interpreting.