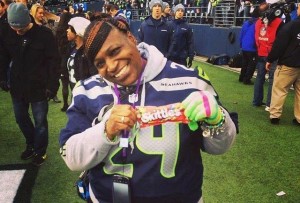 I’m a Rams fan and last Sunday we played yet another fantastically entertaining game with the Seattle Seahawks. The Seahawks seem to bring out the best in the Rams and I can only hope they treat every game hereafter as if it’s the Seahawks.

My post today is about comments made by Marshawn Lynch’s mother about the last play in the game. She was upset with the final call in which her son was asked to gain a yard on fourth down into the heart of the Rams defense. She suspects it was called because in a similar, although far more important, situation in the Super Bowl, Marshawn was not asked to run but a pass play was used with disastrous results.

I do not begrudge Mrs. Lynch the right to criticize any decision made on the field by a coach or player. I’ve done plenty of that on my own in the past. It’s part and parcel of being a sports fan to second guess on-field decisions. That being said I think her criticism analogous to an ideology that is hurting the United States these days.

It seems to me that people eagerly look for a scapegoat rather than trying to find real solutions. In this case Mrs. Lynch blames the offensive coordinator of the Seahawks for the issues.

It’s my opinion that in both cases she cites, there really isn’t a scapegoat but instead a hero. In the Super Bowl Malcom Butler made an exceptionally good play and stopped what would likely have been a touchdown most of the time. In the Rams game Michael Brockers drove the offensive lineman into the backfield forcing Lynch to adjust his path and allowing Aaron Donald to stop Lynch short of the first down. Again, in my opinion, the play call was quite reasonable and would have resulted in success a fairly high percentage of the time.

I find Mrs. Lynch’s search for a scapegoat to be a microcosm of attitudes in the United States. There is a much higher emphasis on finding someone to be at fault rather than admitting that some things are quite difficult. Forces arise that thwart even the best laid plans. It largely seems as if finding blame is much more important than finding solutions.

If we are nation that spends its energies trying to find blame rather than solution; a nation that elects politicians who are successful at blaming someone else without offering realistic solutions, what is our future?

If we instantly want to punish the perceived wrongdoer rather than find a way to prevent the wrong are we not doomed to endless wrongs?

I find the self-righteousness of what appears to me to be the average citizen of the United States nauseating. As if we are not humans who make mistakes. Just because you make a plan doesn’t mean it will work. I’ve failed. I’ve miscalculated. I’ve simply been defeated by the better person. It happens.