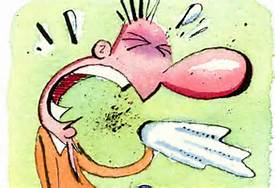 I normally talk about Objectivism, Libertarianism, atheism, and topics of that nature but a recent battle with the common cold brings me to a more mundane subject. What effect does being in an air-conditioned environment have upon a cold?

When I get a cold it runs an extremely predictable pattern. I get a sore throat which lasts for about four or five days, then I suffer from nasty congestion for a day where it seems my head will explode, and finally I start sneezing, coughing, expectorating, and blowing my nose for a couple of more days until finally the cold ends about a week or so after it started.

I’m sure all my loyal readers were happy to read these thrilling details!

The reason I bring all this up is what happens at the very end of my sickness. Generally speaking I like to keep the windows at my house open until the temperature gets above 90 or below 50. I’m strange that way. I like the fresh air and frankly, I don’t like paying insane heating and cooling bills.

When the last part of my cold arrives I find that I’m generally much better when I’m in a fresh air environment. For instance, as I type this post I’m breathing freely and haven’t sneezed or coughed in a while. I still feel a little tingle in the nasal region and I know I’m still sick, it’s just the symptoms are mild.

Last night when I went to my mother’s air-conditioned house for dinner I was the same way until I had been there for about two hours. At that point I started to sneeze and needed to blow my nose frequently. The same thing happened at work this morning. I was fine until I had been at work for a couple of hours, in the air conditioning, and then I sneezed and coughed more and blew my nose more. It grew worse as the day went along.

I’m wondering if anyone else has this experience or if I’m just strange. Well, I’m strange, I think that much can be admitted safely.

Perhaps I’m just imagining my symptoms are worse?  I don’t know. Sometimes the person experiencing a thing is the least well suited to understanding it objectively. When you are sick do you feel worse in an air-conditioned environment?

2 thoughts on “Air Conditioning and the Common Cold”