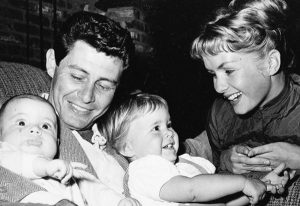 She’s not. Debbie Reynolds might well have believed when she died she would be reunited with her daughter but she wasn’t. There’s a lesson here. For all of us, Atheist or no.

You are a product of your life’s experiences but you are also your own person. You make your own decisions. We make your own way in this world and yet all those decisions, all those results are based to some degree on our friends, our family, our mother.

Does it make you feel better to think that Reynolds has been reunited with Fisher? Why?

Such fantasy does not soothe me nor will it ever.

Life is what we have. Make the most of it. As did Reynolds and Fisher.

That is what I conclude from events of the last two days. Life is what we have. Live it.