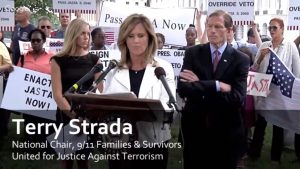 The United States Senate just voted 97 – 1 to override a presidential veto of JASTA and that can only mean one thing. The legislation being proposed is either useless and/or dangerously stupid but helps the senators get elected.

In 2011 terrorists hijacked and piloted plans into several targets in the United States murdering thousands of innocent civilians. A heinous act of stupidity touching off events that ended up killing hundreds of thousands of people in Arab counties, who presumably were to benefit from the attack. So, utter failure.

The legislation in question is Justice Against Sponsors of Terrorism Act. It allows United States citizens to sue other nations when they have provided material support directly or indirectly to people who engage in terrorist acts against people of the United States. It excludes any act of war.

First off JASTA is probably a violation of our existing U.S. laws. That’s well and good but the real problem is something called comity.

Basically, what’s good for the goose is good for the gander. If U.S. citizens can sue foreign nations in our courts then we must certainly allow foreign citizens to sue the U.S. in their courts. Members of Congress acknowledge this fact readily enough and yet vote yes anyway, sigh. Bob Corker, a senator from Tennessee sums up what a lot of others who voted for this nonsense are saying: …concerns about what this bill’s going to mean to America.

What JASTA is going to mean for America is a big giant legal mess. Not only will the United States be liable for a drone strike that killed a civilian but so will everyone indirectly involved. Boeing and my friends and relatives who work at Boeing.

Hundreds of thousands of lawsuits will follow. Not that any of them have a chance of success but they’ll need to be dealt with in a real way.

And of course there’s that zero chance of success business. U.S. citizens can sue Saudi Arabia or another other country all they want. They aren’t getting a dime. It’s completely and utterly useless. I wouldn’t mind useless. When our politicians do useless things it keeps them occupied from doing damaging things. The problem is that this isn’t just useless. It’s damaging. It damages our ability to deal with other countries after we inevitably deny their legal claims against us.

This is our country. Short sighted and willing to propose and enact legislation that we know is bad simply to pander for votes.

Anytime I see a piece of legislation get a 97 – 1 vote I know it must be awful. Harry Reid of Nevada. Kudos to you, sir. A lone voice of reason.