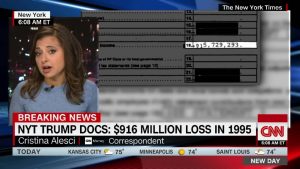 There’s an interesting story in the news about Donald Trump and his various corporations paying no taxes. Some people are outraged and others think he’s a genius. Those are not the conclusion I draw from the story.

I’ve written about this before but I’ll go over it again.

The current tax rate on corporations in the United States is 35%. Many people argue, correctly, that this is far too high but somehow nothing ever gets done. Even when Republicans are in charge of Congress and the Executive Branch the rate stays the same despite all the complaining. Why is that?

Simple. Enterprise Businesses and rich people pay comparatively very little in taxes in relation to their percentage of wealth. The actual paid rate for corporate taxes amounts to about 11%. Why is that? Because Enterprise Businesses have access to an army of tax lawyers to find shelters. They pay little or nothing in taxes for the most part. Just like Donald Trump. Trump isn’t a genius, he’s an average wealthy person with a business and good tax lawyers. None of them pay much in taxes and that’s why they love the current system. That’s why it doesn’t change. Lobbyists from Enterprise Businesses and wealthy people ensure that it won’t change.

So who is paying taxes? Small and Medium businesses, you and me. We don’t have access to high-powered tax attorneys. We don’t have access to offshore shelters. We pay the huge rate. There’s a reason why a higher and higher percentage of all business earnings and employers are from Enterprise Businesses. The system is set up to give them an advantage and they love it.

The more complex the tax code the more the person who doesn’t have access to tax lawyers pays. The more the code is designed to stop the wealthy and powerful from paying the more it actually benefits them. They find the loopholes in the increasingly complex system that the small business owners and regular people cannot.

People argue against a Flat Tax because the perception is that it will cost regular people more. On paper this is true. Paper isn’t reality. In reality if the tax code was simplified the wealthy and powerful would pay more even as their supposed tax rate goes down. It’s all a shell game of deceit. The wealthy and powerful love the tax code that supposedly has them paying high taxes.

Simplify the code. That’s the lesson to be learned.

One thought on “Lessons from Trump Taxes”