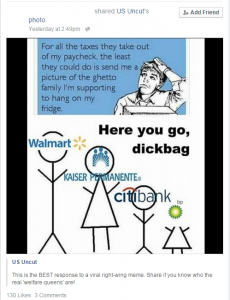 One of my friends shared a post from US Uncut’s Facebook page and because I’m not a friend of them I couldn’t comment. It made me angry so I’m going to write a blog instead of a comment.

The image portrays a white man complaining about his taxes and wanting to see a picture of the “ghetto” family he is supporting. This image naturally enraged some people and they attached a little picture below it showing various corporations who supposedly don’t pay federal income taxes.

Why am I angry about the image. Let me explain.

Most of the Enterprise companies in the world are against this, although their publicity staff pretends otherwise. The reason being that they employ a large staff of corporate lawyers and generally pay nothing in corporate taxes, in fact they get refunds. The 35% rate largely only applies small and medium-sized businesses who can’t use tax shelters offshore and other methods used by Enterprise companies.

Kaiser Permanente is a nonprofit organization. Yes, they don’t pay taxes, but they don’t distribute profits to shareholders and they funnel earnings back into the company. Its inclusion on the list is ridiculous.

Citibank belongs on the list. They are one of the Enterprise companies that uses offshore companies and other methods to avoid paying any taxes. They also benefited from the government bailout program in 2008 although they repaid all loans with interest resulting in a profit for the U.S. government.

Finally, BP. It doesn’t take a genius to figure this one out. It’s a foreign company. They don’t pay income taxes on operations in the United States but do pay local taxes. From what I can find they don’t have access to a lot of the loopholes domestic companies have and they pay the standard rates. So it’s hard to justify putting them on this list.

There are plenty of companies out there that don’t pay much in taxes and could easily have been put on this list.

This sort of laziness bothers me. I mean really, how hard is it to find four Enterprise U.S. companies that use loopholes to pay little or nothing in taxes? A quick internet search takes seconds. Do it yourself and see how easy it is.

If you want to make a point by using an example, at least find a good example. Otherwise I’m going to doubt your entire argument, as should any critical thinker.