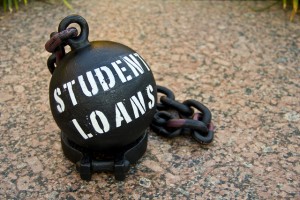 I went down to my corner bar the other night to watch my beloved St. Louis Cardinals play, eat a delicious burger, have a nice gin & tonic, and generally try to shake off my anti-social tendencies. The place was largely empty and I struck up a conversation with the young (and attractive) bartender. What I learned was disturbing. She’s been paying $400 a month to pay off her $35,000 student loan for seven years and she still owes $29,000.

The first step is to identify the problem. It turns out to be systemic and rather like the 2008 housing crisis that cost We The People billions of dollars.

Colleges are charging huge fees for tuition that are far above the value of the education. Banks are giving out loans to people who cannot afford to repay them in a timely fashion. Loans are structured in a predatory fashion to ensure people pay essentially forever. People are willing to take out ridiculous loans. People who should never go to college are going and incurring debt. Lots of blame to spread around.

The next question is to find out how this all came to be. The root cause is money, as is often the case. The federal government, banks issuing loans, and higher education facilities can make huge amounts of money from these loans. 2005 legislation, The Bankruptcy Reform Bill, included provisions that meant declaring bankruptcy did not absolve students of debt. This means that you can’t legally get out from under the debt, you owe forever.

So we understand the problem and its causation, what’s the solution?

I’m no Socialist. I don’t think making higher education free for all is a reasonable solution. It sounds good and it certainly has some appeal. The big problem, from my perspective, is that higher education costs will rise to take advantages of this government larder. Many students who have no business going to college will do so at a cost to the taxpayer.

I am a capitalist and I think loan institutions should make money on their loans. The loans are a good thing in that they provide young people a chance at a higher education when they otherwise could not afford such. They also make money for the banks. That’s good.

So where does that leave us?

The Higher Education Act of 1965 created something very useful called the Perkins Loan. It is more like a car or home loan as opposed to a never-ending credit card charge. It’s a ten year loan at a fixed 5% rate.

Let’s take my new bartender friend’s case. She has paid $400 a month for seven years. That’s $33,600 off a $35,000 loan. Add the annual 5% to the principal and she’s pretty much got the thing paid off. Another three years and she’d be done. However, she didn’t get a Perkins Loan. Seven years into it and she’s nowhere near paying it off and there is no end in sight.

The problem becomes how to limit student loans to just Perkins type structures. If a student agrees to pay a ridiculous loan is it the bank’s fault for offering it? If banks give out insane loans are higher education institutions wrong to raise the fees to absurd amounts? Can the government legally force banks and schools to be less predatory and make a reasonable profit while allowing students to get an education without mortgaging their future? Can we force students to be reasonable about their future and crush their often misguided dreams?

I do think predatory loan practices are essentially stealing. It’s more egregious than taking money from a person via direct criminal actions. Yes, people are foolish to willingly sign for a loan that will essentially keep them in debt forever but fraud is a crime. I see no issue with charging people with theft for loan conditions that are unmanageable. Put a few loan officers in jail for issuing such loans and I think the problem would largely be solved.

Yes, fewer students would get loans. Yes, higher education facilities would see drops in enrollment. Yes, lenders would take a hit to their profits.

The other option is sit idly by while really nice girls like my bartender are made slaves to debt. Oh, and destroy the economy with a huge student loan default.