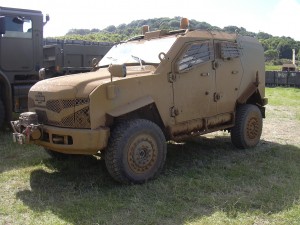 They made the first purchase of 17,000 vehicles for $9 billion and are expected to eventually order 55,000 of them for a total cost of $30 billion. I have a big problem with this but bear with me before you get angry in the comments.

I have no problem with getting well-armored transport for our troops. I think our troops should be well-protected from the Improved Explosive Devices (IEDs) that are a trademark of the sort of conflict we are currently facing.

The price of $545,454.55 per vehicle, which certainly includes maintenance, seems rather high but that’s not my biggest problem with the purchase.

So what’s my issue? 55,000 of these things? I absolutely don’t mind getting enough of these for our troops to use while they are traversing enemy terrain in combat areas. That being said, there is no possible way we need that many of them for such circumstances. The vast majority of these vehicles will be used to transport soldiers back and forth right here in the United States and in other countries where there is virtually no danger of attack. That’s my problem. I don’t see how anyone can argue that we need 55,000 of these things.

There’s no reason we can’t use a lesser vehicle to transport troops in non-combat situations. $30 billion is a lot of money. It represents 5% of the 2011 total military budget. Now the new JLTV will be used over many years so this comparison isn’t completely valid, that being said, it’s a lot of taxpayer money.

If the people in charge of spending this money had any responsibility they would have ordered two vehicles. One for transport in safe areas and one for combat. There would be a much smaller number that were combat ready. Thirty years from now, the Humvee has been in service 31 years, we’ll be ready to replace these 55,000 vehicles with something new and I absolutely guarantee that a tiny percentages of those to be retired will have been used in combat dangerous situations. It’s a total disregard for taxpayer money. It’s largess to OshKosh. It’s nuts. It’s symptomatic of a government that just doesn’t care, that will do what is in their own interest, not what is in the interest of the nation.

One thought on “55,000 Armored JLTVs for Thirty Billion Dollars”