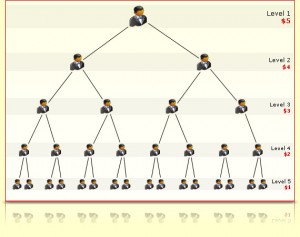 The Federal Trade Commission just shut down an organization called Vemma Nutrition Company because the government claims Vemma is operating a Pyramid Scheme. Vemma argues they are a legitimate Multi-Level Marketing company and have done nothing wrong.

I’m not much interested in the legal niceties that separate a Pyramid Scheme from a MLM company. It’s all pretty much the same thing. They prey upon false hopes. People are told they will make a great deal of money and then forced to purchase products and recruit other people into the company to do the same. All MLM companies make the vast majority of their money not from selling products to the public but in selling to their unwitting dupes.

Most studies show that around 99% of sales representatives for such companies make very little or no money at all. The information about MLM businesses is readily available for anyone caring to do even a cursory search of the internet. The FTC strongly warns people to stay away from such companies.

The question I ask is if the government should be shutting down such businesses? The reason largely given for government intervention is that the owners are committing fraud by telling potential sales people they can make a lot of money and forcing them to purchase more and more product. To some degree I agree with this point, fraud is a crime. If someone lies in order to steal your money they are behaving in a criminal fashion. However, if the lie is obviously a lie and you are simply a hopeful fool, it is my opinion that law enforcement should not be trying to protect you from your own foolishness.

I fully support the FTC in their warnings about MLM schemes. I think that is one of the things that government should be doing for us. They should investigate such employers and publicly warn people against working for such as them. That being said, I think there comes a time when the government shouldn’t be trying to save us from ourselves.

What happens is that MLM companies soon learn the legal boundaries of their deceit and operate within those limits. Thus companies like Mary Kay, AmWay, Herbalife, and dozens of others keep their policies just above the illegal threshold.

So when the government shuts down Vemma for a short period of time we get the impression we are safe; that Mary Kay is not a Pyramid scheme but a legitimate company because they are allowed to continue to operate. Meanwhile Vemma tweaks a couple of policies, pays a fine, and returns to once again fleece gullible college students across the world.

What has the government accomplished?

Don’t get me wrong. I think MLM companies are despicable in their deceit and their willingness to take advantage of the desperate. I just don’t think the government can save us from them. That’s up to us. The information is there.

Don’t work for an MLM and don’t help your friends out by purchasing their products. You’re just hurting them.

That’s the only long-term solution.

One thought on “Is Shutting Down Vemma the Role of Government”