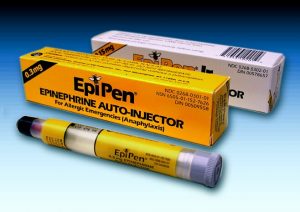 EpiPen is in the news and many people are angry.

There is, in fact, quite a lot to be angry about. The government encouraged the entire thing. Don’t get me wrong, I’m not absolving Mylan and CEO Heather Bresch of wrongdoing. They took advantages of a system to steal perhaps hundreds of millions of dollars from both the government and average people. But the system is all but designed to be abused.

EpiPen is a medical device that injects a measured dose of epinephrine. It was brought to market in 1987 after approval from the FDA. Things get quite complicated from there and I’ll try to summarize as best I can. If you want to know the entire sordid story read the Wiki article.

Basically the manufacturer of the device changed hands many times. Each time the new company aggressively sought to protect their patent, buy out competitors, and maximize their profit. The most recent company to acquire EpiPen is named Mylan.

The United States government helped Mylan greatly with draconian patent laws. In addition the FDA makes it extremely difficult and expensive to introduce competitive drugs to the market. Using these two factors to their advantage EpiPen managed to control a monopoly on the drug.

Price Gouging is largely not illegal so EpiPen can charge whatever they want for their product, and they did. However, if getting competitive products to the market was not so difficult, if the government did not tacitly help Mylan maintain their dominance in the market, bargain price manufacturers would certainly have undercut Mylan and restored the market to an equilibrium. In a word, capitalism.

In addition Mylan used a private non-profit called the National Association of State Boards of Education to influence, read bribe, state and local governments to pass laws protecting schools from all liability when using EpiPens. This meant schools across the nation purchased that particular product because it was legally, thanks to state government, less risky. The close ties between Mylan executives and the NASBE, Heather Bresch’s mother is the president having been appointed after large donations from Mylan, is disturbing if not illegal.

Into this mix comes Medicare. Medicare is an enormous government agency designed to make sure elderly people don’t go without medical care. Among their many regulations are different fees for generic and brand-name drugs. Generic drugs pay a significantly smaller rebate. Mylan listed the EpiPen as generic when it was clearly brand-name. This meant they didn’t rebate the government as much for purchases, to the tune of about $100 million. I can only guess agents in charge were bribed to ignore the listing.

There aren’t simple answers to these problems. I don’t pretend there are. But I wouldn’t mind if people took note of the complicity of government in the EpiPen mess. In government’s integral role in the fraud. Mylan used the government but the government is designed to be used. It begs unscrupulous business owners to join the party.

One thought on “Regulation Quagmire of EpiPen”