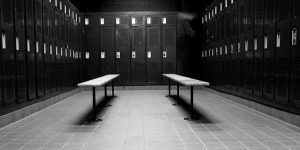 I don’t have to tell you what today’s blog is all about. Back in 2005 at the youthful age of 58, Donald Trump made some claims about how he behaves with women that are dominating the news cycle.

He has excused his words as Locker Room banter.

As many of my readers know I love sports but most are probably not aware that I played sports. I started at the age of 10 playing baseball and I was in locker rooms pretty consistently until I graduated college. I was no star but I can safely say I know a thing or two about locker rooms.

The following language is going to be harsh. If you are easily offended, triggered, or do not like vulgar talk then you should turn around and leave right now.

Locker room talk is largely men talking dirty about women. About what we’d like to do to a particular woman. I’m going to give some examples.

Example: “Did you see that bitch hanging out of her sweater in the front row? Tits as big as my head. I’d fuck her on the floor of a gas station bathroom.”

Response: “She was fine. Hellz ya.”

Example: “My wife is a dirty whore who sucks like a vacuum cleaner.”

Response: “Lucky bastard.” “Does she have any sisters?”

It is less often about actual activity but can be.

Example: “See that ho in green? I met her last night if you know what I mean.”

Response: “Damn, brother. You best be careful where you put your horse cock or that thing might fall off.”

If is often filthy jokes that have no basis in reality.

Example: “That bitch was so loose I fell in and got lost. Luckily I found a McDonald’s in there.”

Locker room talk is vulgar. It’s rude. It’s almost universally not meant to be taken seriously. The details of what happens in the bedroom stays in the bedroom.

What Donald Trump said is not the kind of Locker Room talk with which I’m familiar. The locker rooms I frequented did not tolerate talking about other people’s wives, girlfriends, or sisters. It did not include bragging about actual acts of physical aggression toward women. The lockers rooms I spent much of youth in did not take lightly talk of assaulting women. The men in there have mothers and sisters. Anyone making the statements that Trump made would likely have found their head in the toilet.

To be very clear here. Locker rooms are filled with good looking, charismatic men, they often had sexual encounters with beautiful women. Only rarely did I hear even vague details about actual encounters. “Yeah, I made out with Karen last night.” Even telling other guys that you had sex with a particular girl was generally considered out of line. A real man doesn’t kiss and tell.

There is an enormous difference between, “I’d like to get my head between those legs” and “I grabbed her pussy. Because I’m rich, ha ha, she couldn’t stop me.”

Maybe those were just the locker rooms I was in. Maybe Trump was in different ones although I can find no record of him playing athletics at all.