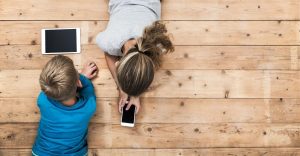 There are a number of studies indicating cell phone usage for young children can cause developmental problems and now the state of Colorado wants to pass a cell phone ban restricting the sale of such devices to anyone under thirteen.

Anyone who reads my blog well knows I’m a Libertarian and you can probably guess on which side of the issue I come down upon. However, it’s not quite as cut and dried as you might imagine. Naturally I think it’s a silly law, I hope that goes without saying. Parents have access to information indicating what is a good age for cell phone use and how much such devices should be used by children. Said parents should make the final decision about their child’s use of cell phones. It is ridiculous for the state to attempt to usurp the rights of the parents so.

That being said, the Constitution of the United States is silent on the subject of cell phone sales with the intent to distribute to a child. Where the Constitution is thus silent, it is the purview of states to do as they will. In this case, the constitution does not grant me, or anyone else, the right to own a cell phone. Therefore, the state of Colorado is free to ban the sale of such devices.

I think the passing of such ridiculous laws often results in exactly what the Founding Fathers envisioned when they tried to limit the power of government. It is when legislators try to impose such ridiculous bans on the people of our country that action is often finally taken. If the people in Colorado think this ban is insane, if manufacturers of cell phones move their business elsewhere, if a parent is denied the right to buy their child a cell phone and has to go through the inevitable black-market to get one; there is recourse. They can vote for representatives who repeal such a law.

Then the matter goes to the voters.

This is the driving force behind our form of government. It only works when politicians care about passing laws and stop worrying about public sentiment. I think this law is ridiculous, but the elected representatives of the people of Colorado may think otherwise. Good for them.